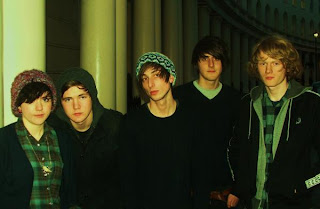 Yesterday we fell in love.
We fell in love with the sound of sleepy chiming guitars and the sweetest of female vocals. This voice, these bewitching tones, come from a girl named Sarah Hall. Her band are called Let’s Buy Happiness. They come from Newcastle-Upon-Tyne, UK. Let’s Buy Happiness may be very much in their infancy, but they make a breathtakingly beautiful sound, like an alternate version of late 80’s / early 90’s cult indie guitar band The Sundays. Or a woozier earthier version of The Cocteau Twins.
Let’s Buy Happiness produce a dreamy ethereal reality. This reality can be heard on their self released 5 track EP No Hot Ashes. It‘s absolutely lovely. Managed by Martin McLoon the bass player from Prefab Sprout, the band have already gathered support from Tom Robinson and Lauren Laverne on BBC 6 Music and have reached the final of the Glastonbury Emerging Talent competition whittled down from 1600 entries to just 12 acts standing.
Listen to Works Better On Paper below and you will see exactly what we mean. With fountains of doomy but transcendent guitar work that wouldn’t seem out of place on Disintergration by The Cure and girlish-yet-knowing vocals Let’s Buy Happiness are about to make you fall in love. Again.
Posted by Breaking More Waves Blog at 00:01

This is really, really wonderful. Sounds like Ellie Goulding backed by Chapel Club.

I love Let's Buy Happiness. Alongside Mansfield Holiday, Brilliant Mind and Polarsets they're one of Tyneside's brightest new bands. I'll be delighted if the land a slot at Glastonbury.