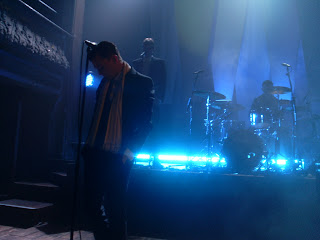 There is a school of thought that says to be engaging as a band you have to display honesty. The indie ethic of building a fan base through song writing and hard gigging, of being ‘real’ not ‘manufactured’ is important.
This is why it is easy to cynically dismiss Hurts. Playing only their second ever gig with a major label deal already behind them, a placing on the BBC Sound Of List, rumours of David Sneddon (remember him) co-writing for the band, two heavily stylised videos unleashed on the web and mysterious one word tweets on Twitter, Hurts seem to have jumped on board as deceitful tricksters; a kind of pop noir Bill Fagin for the new decade. Yet if they are, they are masters of their trade.
There’s a real sense of occasion to this gig. Wiltons Music Hall is a fantastically creepy, decrepit, yet beautiful venue. Built in the 1850’s, its sloping wooden floors, barley twist columns, two tier stage and subdued lighting transport you into a decadent past where raunchy French can-can girls and sordid striptease artists paraded for drunken gentlemen. It’s no wonder Mumford and Sons recently hired the place to shoot their Little Lion Man video. It has a unique atmosphere and for Hurts there’s a palpable level of expectation in the air, which when the band arrive on stage is almost at ejaculation point.
Popjustice recently described Hurts as ‘the greatest male pop duo of the 21st century’ and based on this performance we agree. With their slicked back hair, cheekbones to die for, and smart suits, singer Theo and keyboard player Adam look brilliantly pretentious. Theo even wears a white scarf and carries a comb. They look a little like a gaunt and sombre Johnny Hates Jazz. If that sounds terrible on paper, in reality it works superbly. Everything they do visually, which often is very little, is executed with a certain rehearsed moody and theatrical stillness. Theo stares at the crowd with a slightly unhinged look in his eyes, and even has the audacity to spend a significant amount of the gig with his hands in his pockets.
Behind the duo on the elevated back stage a drummer, keyboard player and white bow tie sporting male opera singer help deliver the music - epic and grandiose pop songs that have elegance and majesty written all over them. Unspoken, which the band dedicate to the recent winter Olympian (Nodar Kumaritashvili) that died, starts as a plaintive boy-band ballad but then skyrockets into a gloriously haunting Vangelis styled power epic. Illuminated is even better, a modern day electro-melancholic Vienna complete with apocalyptic operatic backing vocals and warlike synth riffs. The only song that doesn’t hit the spot on first listen is rumoured future single Better Than Love, a darkly pulsing synth-pop tune that features a multitude of swirling computerisations straight out of the Now That’s What I Call Alternative 80’s back catalogue. But with this one song excluded, if all commercial pop music was as stylish and as powerful as what Hurts delivered to Wiltons Music Hall, the charts would be a far better place. Proof that honest or not, ultimately it's the quality of the music that is the most important.
Posted by Breaking More Waves Blog at 00:01

thank you for this report, really looking forward to getting an album of these fellows. Any word on it? And by the way: Ellie Goulding's album is out, why is there no review on that one?

As very much a part time blogger (real job, family and a social life taking up significant amounts of our time) sometimes reviews either just don't happen or are a little delayed. (There will actually be more about this on a post coming in the next few days, so watch this space)

In the next few days there will be reviews of both the Ellie G album and the Holly Miranda album but I am taking a little more time with these. Recently I reviewed the Yesayer album after only having listened to it for a week or so and I now disagree with my own review - I actually think it is better than I originally said - a grower as it were - so bear with me on some of my reviews.

A simple consumer (and lover) of this blog like myself easily tends to forget how much time it costs to do what you do. But I'm looking forward to it! :) Thanks for all the time you put in this blog to deliver us good news and cool new waves :)

Cheers and many thanks....