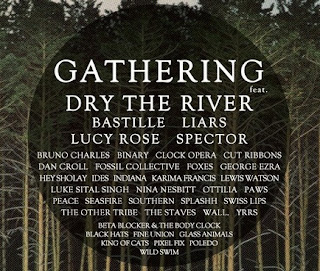 The UK Festival season is over, right? Wrong. It might be getting chillier and only the foolhardy would consider camping in a tent for the next few months, but there are still plenty of events with more than one stage and a bunch of bands ready to thrill your pants off. From Swn in Cardiff (like a smaller Welsh version of Great Escape) to the ATP events (this year relocating to Camber Sands) to Oxford’s Gathering, there’s lots for heavy drinkers of music to sup on – it’s just that until next summer we’re back indoors.

Based on just one street (Cowley Road) Gathering is a one day event more akin to The Camden Crawl (the Cowley Crawl perhaps?) or Breaking More Waves own hometown event of Southsea Fest; there’s no running all over town to skip between venues here, as everything is close.

In terms of booking the festival the organisers of Gathering have been rather clever. Rather than try to market themselves as another event with 100’s of bands to see, (which in reality is an impossibility – you can only be in one place at one time) and spreading their budget thinly on artists that are far from excellent, they have kept the number of venues to just five and booked around 30 new acts with quality running throughout the bill. With a mid-afternoon start and a finish of 3am those who don’t like to get out of bed too early to enjoy a festival will be well suited, but Breaking More Waves will be making sure we’re there as soon as doors open to catch as much as we can (and tweet about it here).

Tickets for Gathering, which takes place on the 20th October are flying out and the organisers are stating that they hope to sell out before the day, so if you’re considering going grab yourself one now from Ticketweb or We Got Tickets. We’ll be carrying a review of the event shortly after it’s done and dusted.

The line-up of Gathering features many bands that we’ve posted previously on this blog (click the links to find one of our posts) including Clock Opera, Foxes, Indiana, Nina Nesbitt, The Other Tribe, The Staves , Spector, Wall, Seasfire, Ottilia and Lucy Rose. It's almost as if we've had a hand in curating the event! There's also a handy Spotify playlist for the event (click here) compiled by When The Gramophone Rings.

If that's not enough, here are three more acts that we’ve not featured up until now on the blog that all come recommended.

A hotly tipped South-West London singer songwriter who has already picked up comparisons with Bon Iver, Fleet Foxes and Ryan Adams. His songs are subtly touching, quiet and intimate.

A band that have failed their spelling test in order to ensure they are easy to Google, Splashh are an indie rock band that sound like they’ve been listening to a hell of a lot of The Pixies. This is a potentially very good thing.

Liverpool's Dan Croll has got the blogs and online press chattering about the UK's answer to Grizzly Bear, but really Croll is the answer to nothing except himself. Quirky, accessible clever pop is the name of the game here, with debut single From Nowhere revealing its brains more with every listen.