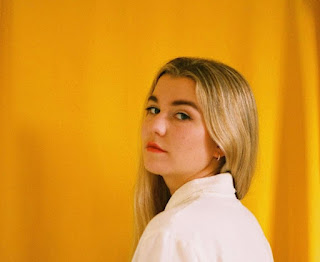 If you follow me on Twitter (click here), you might have noticed that last weekend I made my annual pilgrimage to the Great Escape Festival, Europe’s largest New Music Festival, which takes place in a multitude of venues in Brighton, East Sussex. Despite hearing the normal grumbles from some punters about not being able to get in to see certain gigs as venues reached capacity and seeing the odd complaint on social media from artists on the way they were treated at the event (like this – although I don’t really understand the ‘no water’ complaint – was there not a tap in the venue that artists could fill up a reusable bottle from?), from my perspective Great Escape remains a joy.
Where else can I see 39 full performances by mainly new bands and artists from all over the world in mainly small space for a £45 ticket? I saw acts from South Korea, Australia, The Netherlands, USA, Ireland, and Denmark to name just a few, as well as a whole host of acts from the UK. Not only that but since I first attended in 2007, I’ve seen Great Escape evolve from a mainly indie-guitar-centric festival to one which embraces diversity not only in the music but also in the characteristics of artists it features (the festival has been hitting high quotas of female and artists of colour for a long time). So it’s a festival you can never get bored at. And this year the App that Great Escape used included a venue capacity gauge giving you an indication of if there was a queue outside or not.
With Great Escape in mind, the next couple of posts on Breaking More Waves feature new artists that I came across at the festival that I knew little or nothing about prior to.
The first is KID 2 a Norwegian singer-songwriter who is currently based in Brighton. I caught her playing in a garage at a free Alt-Escape show at a small sun kissed courtyard just off Middle Street near the seafront.
She has released just 2 songs to date. Debut Leave Me Out in 2020 and August Morning in 2021. Both are tenderly unhurried pieces that will make you drift away, leaving you feeling a little bit melancholy and meditative. Club bangers they are not. But for those of you who want something calmer, performed with an air of confident serenity they’re worth a listen.
There will be more material from KID 2, but much like her music, it won’t be rushed. Expect something coming later this year.
Tickets for Great Escape 2023 are on sale now here. (Unfortunately they have now gone up to £70 after the 'secret' early birds at £55 and the super early birds at £60 sold out within a day or so)
Posted by Breaking More Waves Blog at 22:00 No comments: 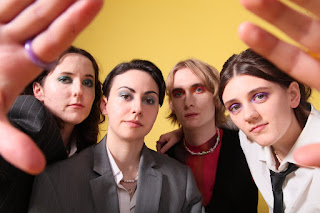 Today’s new band claim to have a songwriting style that takes inspiration from Carly-Rae Jepsen and Chvrches. Yet on debut single Alice they sound a lot like early The 1975 circa 2013. Of course, it’s dangerous to start making comparisons when a band only has one single out; take Pale Waves for example who I threw exactly the same comparison at on their first official release, but now I’d compare with Avril Lavigne. We’ll all need a few more songs to make a better judgement, but this is a new music blog so sometimes super-early commitment is required.

The band in question is called Supersaurus, and a quick Google will tell you that they are a top UK wedding and party band available for hire, who are renowned for filling dance floors. Which just shows that you need to be careful with the internet. For that Supersaurus is a totally different band of the same name. Although maybe this lot could also soon be renowned for filling dance floors at your local indie disco perhaps?

So this Supersaurus, the one you need to focus on, is made up of Benji, Tay, Lauren and Becca. Their aforementioned debut single was released earlier this month. It’s a jubilant sounding piece of guitar pop, although if like THAT famous song you're asking who the f*ck is Alice, the answer is not exactly clear. One of the first lines is: “Hey Alice, I think I could have loved you, but you’re not real, no you were never real.” Elsewhere there are lines about: “It was all in my mind, all the beautiful things, that are lost in another timeline.” Is Alice just someone that Benji saw on line? Perhaps. Maybe she was just a dream? However, what is clear is that Alice (the song) swooshes with a guitar laden melody that would sound great on the radio. It also contains some great 'Hey' shouts, which anyone who has studied the Rules of Pop* will know is always encouraged.

Posted by Breaking More Waves Blog at 07:00 No comments: 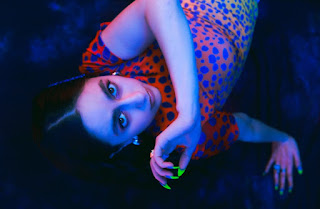 Orchid’s Insta bio describes her as a Goth Pussycat Doll. Her Twitter says she’s a Worldwide Quirky Girly. I’m going to add a far less witty three-word slogan and just describe her as Really Quite Good.

You’ll probably agree with me on the Really Quite Good part when you hear her track Like Thunder which is taken from Orchid’s (aka Orchideh Vishkaiy) EP of the same name and it’s been pricking up ears over the last few weeks. It’s a minimalist piece of left of centre pop that crackles with the same sort of perfectly controlled yet still deviant experimentation that the first FKA Twigs album possessed. The accompanying visual also shows that it’s possible to shoot a video in a swimming pool without resorting to tackiness (anyone remember Sabrina’s Boys Boys Boys? Let’s not go there, OK?)

One listen to the whole of the EP, released a couple of weeks ago, will confirm two simple facts. First, Orchid isn’t a one trick pony. Second, she’s clearly in love with modern contemporary pop. Doe Eyes is the part of the Venn diagram where UK garage intersects with Britney Spears. Then there’s Later, which is a tempo shifting jam that hints at Ariana Grande and punches pretty hard with a radio friendly chorus.

Of course, one of the things that sets the big names in pop apart is that they can do it live with venom and charisma. It’s early days for Orchid on that front and as yet there don’t seem to be any gigs announced. However, a little bit of internet searching reveals an artist of the same name supporting Glassio at The Old Blue Last in August. Could that be her? Quite possibly.

For now, let’s live with the recordings. Really quite good probably wasn’t up to scratch as a description, was it? Maybe instead let’s amend that to Quality New Pop-Star. 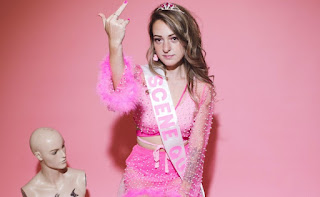 Scene Queen, born Hannah Collins in Ohio USA, is the latest addition to a crop of artists who are taking the sounds of RAWK, primarily the sound of nu-metal and industrial before mashing it up with hip-hop beats, nursery rhyme hooks and venomous spoken-word lyrics that go straight for the jugular of crap men.

“Pink rover, pink rover, please send the coward over. And if that bastard whistles, put a knife up to his boner,” Hannah narrates on Pink Rover as she brutally lets men know what she’s going to do about inappropriate harassment if they dare try it. In its 2 minutes of existence it rages hard. This isn’t punk rock, but pink rock as exemplified on three of the four songs she has released so far; Pink Bubblegum, Pretty in Pink (not a cover of the Psychedelic Furs song) and the aforementioned Pink Rover.

Scene Queen brands her style of music as Bimbocore and if you like Ashnikko, Poppy and Poutyface then Hannah is going to be right down your kick-ass street.

Scene Queen releases her debut EP on April 29th. If you are in the UK watch out for her debut UK show at Great Escape festival this May.