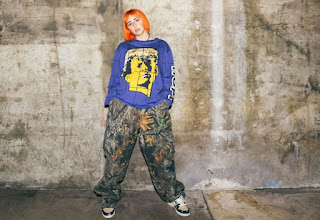 Today there’s a new addition to the Breaking More Waves NEW list; Amelia Moore. She’s an artist that makes the sort of edgy pop that sounds like the future, only in the here and now.

If this is the future it also looks like condiments and sauces could play a big part; after all Amelia’s debut single from late last year was titled sweet and sour (yes it has the almost obligatory modern stylings of using no capital letters) and now her new one, released today and featured on this weeks' Breaking More Waves New Music Weekly Playlist (here), is called vinegar. If the next one is called mayonnaise or ketchup then we’ve got her sussed, right?

Besides the sauciness it also seems that Amelia is a big fan of the most under rated of colours – orange. ‘Orange universe loading’ says her bio on Spotify alongside a playlist with tracks by Rex Orange County and Blood Orange called Orange Only. It doesn’t take a genius to guess the colour of her hair, even without the picture above.

Now to the songs. The music that makes up sweet and sour shows how perfectly the tune is titled. It’s a mix of angelic honey coated modernism but there’s also a darkness, particularly in one of the dirtiest, minimal breakdowns you’ve probably heard for some time. It’s a moment to turn up really loud and make your neighbours wonder what the f*ck is going on next door. “I’m an angel till you cross the line, good girl but I’m doing time,” she sings.

New song vinegar, out just a few hours ago might have elements of a standard mid-tempo ballad, but the chorus sways towards the leftfield in an agreeably synthetic manner as Amelia sings: "Vinegar pour it in my body, where it hurts like a pity party."