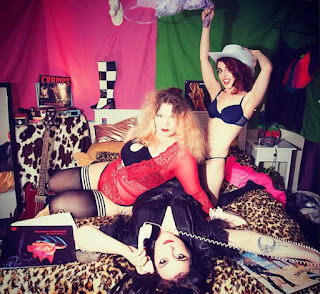 The last month or so has seen pretty much every music publication give a run-down on their predictions for 2022; from buzz bands to future hip-hop stars to the next Ed Sheeran wannabe. The crystal balls have been out in full force. Breaking More Waves was no exception, posting an annual Ones to Watch list in the later part of December and early November (here), mirroring the idea of the BBC Sound of list by choosing just 10 artists – albeit the lists choices only matched with one act (Wet Leg), albeit two of the artists on the BBC list (Yard Act and Baby Queen) appeared on the Breaking More Waves list a year earlier in 2020 – hence allowing a gentle brag that Breaking More Waves is still ahead of the game.

Now that hype season is over, it’s time to get back to introducing a bunch of new exciting artists. Some may eventually reach the dizzy heights of pop stardom, whilst others will release a couple of songs that burn brightly and then fade away. That’s how pop works. That’s also how Breaking More Waves works. It’s not about finding the next big thing, it’s about highlighting the good stuff. Often the good stuff doesn’t stick around forever – but sometimes we’ve just got to enjoy it whilst it lasts.

Let’s kick things off with Tits Up. A brand new band from Liverpool who released their debut EP on January 1st 2022.

Tits Up are Evie (vocals and bass), Jess (guitar) and Amanda (drums). They do speed punk with a slap of Riot Grrrl and rowdy old fashioned rock n roll. It’s direct, it’s frenetic it’s fierce. They are the sort of band that will probably have audiences throwing their sweaty bodies around in tiny clubs. The tunes are energetic and in your face, the vocals shouty and guttural and you can find 5 of them on the aforementioned pun(k)tastically titled debut EP Greatest Tits.

Given the way that some part of society tends to think of / be offended about certain body parts, Tits Up are probably not going to be mentioned on the radio that much. The band admitting as much on Twitter: “No one’s allowed to say our name on radio and we have one radio friendly song. We didn’t think this through did we. Smashing it,” they tweeted recently. Of course, there’s a whole debate to be had there about why the word tits is often censored and yet other bands with names that include body parts aren’t. Is it about sexualisation – well if it is I don't see the band Feet not being named and some people have a foot festish.

Tits Up are the sound of straight-up no-bullshit raw DIY music. Gig promoters – you’d better have good security in place when they play Get Ya On, a sneering 100mph riot of a track, as bodies could be flying. However, there is a measure of respite on Baby which starts with a slower trippy rock groove before exploding with a throat wrenching squall. Macho Bullshit meanwhile gives a big clue to its lyrical nature in its title, the chorus ringing out: “Your Macho Bullshit don’t fool me, your macho bullshit is kinda cringey.”

Tits Up are far removed from the world of hype lists and end of year Ones to Watch polls. But if you like your music unprocessed and unapologetic, tune into their world.

Email ThisBlogThis!Share to TwitterShare to FacebookShare to Pinterest
Labels: Tits Up