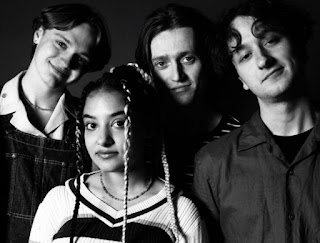 With a title like R&B the last thing you’d probably expect to hear is a storming piece of indie-art-rock in the vein of Dry Cleaning or Sinead O’Brien, but that’s exactly what you get from English Teacher on their new single. Having drip fed three songs in 2020 the Leeds based four-piece is newly signed to Nice Swan Records who released records by artists such as Sports Team, Pip Blom and Portsmouth newbies Hallan. Essentially, if you like your music with a guitar / 6 music listener feel Nice Swan is a label you really should be into by now, if you're not already.

Whilst R&B displays a rousing crunchiness combined with a spoken word delivery, the rest of English Teacher’s material shows that they’re a versatile band in the making. Last June’s You Won’t Believe How Beautiful She Is When It Has Snowed might sound like the title of something churned out by The 1975, but it drizzles a gentle low-key artistic languidness whilst lead singer Lily references Friedrich, Shelley and Byron in the lyrics. The Treacle Trap Door meanwhile sounds like a potential set closer in the making, managing to be suitably sprawling and uplifting in just under four minutes. If this had been the 90’s it would have been released on Chemikal Underground records for sure.

It’s no surprise to see English Teacher starting to pick up some attention with their releases so far. They have a slot on the Great Escape festival’s online event and have received some funding from the PPL Momentum Accelerator Fund, which helps artists outside of London to get beyond the first stage of their career, with funding for recording and marketing granted.

For now though, take a listen to new single R&B. You can also find it on the new Breaking More Waves New Music Weekly playlist (click here). But don’t then just think that everything they do sounds like that. Take a listen to their small back catalogue as well.