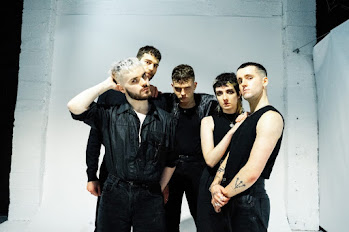 When I pressed play earlier today on the debut single by Glasgow’s VLURE, Spotify told me that the group had a grand total of 0 monthly listeners. Let’s hope that this changes quickly because these Glasgow based industrial post-punks sound bone-shakingly magnificent. Remorselessly intense but yet gloriously uplifting, VLURE channel a sound that could easily inspire faith and devotion; and yes at this point I’m going to have to reference Depeche Mode because there are some very big, very 80’s synth washes going on here amongst the shouty-punkiness and throbbing bass energy.

Not only do VLURE sound viscerally exciting but they look the part as well. Their look is very monochrome; all black leather and cut off tees and this aesthetic cuts through to their introductory performance video which could have easily been shot by Anton Corbjin given its style. Capturing the band at Axiom Art in Glasgow it gives an exciting glimpse into what this band are about; moody stares, a pent up like a tiger in a cage lead singer and a sense of something fully formed.

You may be reminded a little of the Murder Capital (who VLURE have already supported in their home city to glowing reviews) as their performance possesses the same sort of potency. Did I say they were magnificent? Well that needs repeating.