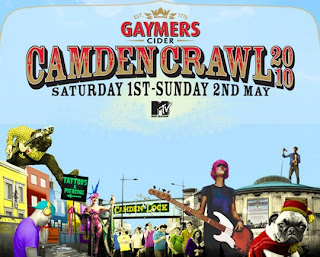 As the indie kids of London wake themselves from bleary hangovers Breaking More Waves is already back on the Camden Crawl 2010 for day 2. Treana Morris is the first of two acts that we catch at the start of a showcase put together by Andy Ross (the man who signed Blur) at the Spread Eagle pub. Blessed with a powerfully clear soul soothing voice and passionate acoustic guitar playing, the warm applause she receives from the small crowd is entirely warranted. Looking a little like Quentin Tarantino, singer songwriter John Drake adds a touch of big voiced masculine stadium rock to his acoustic platter, his singing reminiscent of Bono and Kelly Jones.

From the Spread Eagle a short trip down Parkway and up Camden High Street finds the Camden Crawl stretching out from the pubs and onto the street where a new ‘Redbull Bedroom Jam’ outdoor arena has been created next to the offices of MTV. Complete with outdoor bars, food stalls and portaloos, this is as close to a typical summer outdoor festival in a field as Camden can create, albeit with tarmac, parking restriction signs and bitterly cold weather. The chill doesn’t stop a big crowd turning out for Dan Le Sac vs. Scroobius Pip who are brilliantly entertaining, funny and damn good at what they do. In less skilled hands the delivery of raps with subject matter such as teenage pregnancy could come across as patronizing to a young crowd, but Pip has the wit and intelligence to deliver the words deftly. From the joyous motivational groove of Get Better to the tumbling bleepy beats and commandments of Thou Shalt Always Kill, social awareness and humour are present with every line he drops. Creating his own mini election by getting three kids in the crowd to put on Clegg / Cameron / Brown masks and perfroming a dance off (Clegg wins - to which Pip responds, what did we expect, this is such a liberal festival) he warms hearts and cold bodies; one of the performances of the day.

Things don’t look so good for significantly hyped three piece Is Tropical. Considering the nippy temperatures outside the band seem to have picked a highly inappropriate name. They also fare less well with crowd numbers than Dan Le Sac vs. Scroobius Pip. A complete lack of stage presence doesn’t help justify their worth either - the scarves they wear as masks seeming to be a defence mechanism for their shyness rather than some elaborate art statement. Yet in the instrumental Seasick Mutiny they have a quirky gem - like a bonkers cartoon Hot Chip going lo-fi with indie guitars and retro one finger keyboard bleeps. More like that and they could be on to something.

Upstairs at the Lock Tavern it’s rammed to the door, if anyone wanted to leave they probably couldn’t - so packed in are the bodies, necks craning for a view. It’s the The Molotovs who benefit from this sardine like venue, their well crafted indie song-smithery being highly accomplished. Floppy fringes, vests and an occasional falsetto reminiscent of Wild Beasts combine with adept musicianship to suggest that maybe The Moltovs should have been playing a somewhat bigger room.

The Electric Ballroom hosts the 20 strong all female choir / novelty / collective that is Gaggle. Dressed in an assortment of ribbons and odd headdresses they’re like an all female Polyphonic Spree with doomy beats and fierce questioning vocals. They include a cover of Marina and the Diamonds Mowgli’s Road and another song that has a chant of “I like cigarettes,” followed by a response of “But I like nicotine patches more.” Gaggle are bizarre, warped and strangely entertaining. More orthodox is Lightspeed Champion who plays immediately after Gaggle. With a set that covers both old and new material there’s maybe a little bit too much musical virtuoso guitar work than blistering melodies, but overall his melancholic pop workouts are reasonably likeable and go down well with the masses that have arrived to see him. And was that a member of We Are Scientists on the stage? It was indeed.

Fighting past the drunken indie masses littering the Camden streets, just round the corner from the Electric Ballroom, the Underworld plays host to US rock band Surfer Blood who play their first London shows at this event to another busy room. Power riffs combine with more danceable rhythmic jangly sounds to create a strong set. Swim is a bona-fide punch the air anthem in the making, and any band who features a keyboard player with huge afro hair gets our vote.

The last stop of the evening is at the Rock bar where the lo-fi slacker indie sounds of Yuck drench the venue in effects laden reverb, distortion and effects that recall a time when indie didn’t mean the day-glo soundtrack to a Skins episode, but the fuzziness of bands such as Dinosaur Jr, Sonic Youth and Pavement. The Wall is particularly effervescent, full of simple grunge-like energetic guitar riffs and whining repeated vocals, the four piece delivering on the building buzz about them. And if the keyboard player from Surfer Blood has good hair then the drummer from Yuck has improbably brilliant head foliage - it's like a volcanic electrified mushroom cloud. Their songs are a gloriously noisy racket, which makes for a dirty and scuzzily noble finish to the 2010 Camden Crawl.

It's OK for those who had press passes and could get into all the venues by jumping queues. For those of us normal punters we had to put up with the rain, lots of queuing and lack of information about who was playing where and bands pulling out. I won't be attending again - this event sucks.

Sorry you didn't have a good time Anon.

Not a lot the organisers could do about the rain, I found an umbrella helped :) and inevitably popular bands will be over subscribed, it's the nature of an event like this - unless hardly any tickets are sold, which then means the event won't be able to run. I know that The Drums had big queues to get in for example but also that the organisers had put out info on line saying that The Drums show was likely to be over subscribed and suggested that if there was a large queue just go and see something else instead - there was plenty of other good new music out there and other venues weren't even at half capacity.

As for bands pulling out - again inevitable with the size of the event that you will get a few drop outs, (Holly Miranda for example pulled out but did put info out on the internet the week before confirming she wouldn't be playing) but I do agree there didn't seem to be any information about who had dropped out and / or replaced them on site. This could have been simply countered by an amendment slip in the timetable and / or use of a text messaging info service - something I think organisers should consider for next year.

The timetable seemed pretty clear in terms of who was playing where and when to me, with a handy map if (like myself) you weren't familiar with all the venue locations.

The only queues we personally encountered were 10 minutes queueing for a wristband on the first day (no issue with that) and 5 minutes to get into The Molotovs, and 20 minutes for Gaggle but that was because we arrived 20 minutes before the doors opened (and were therefore first in the queue) - but in the grand scheme of things this was virtually nothing. With a little bit of advance planning we found it relatively straightforward to get into to see everything we wanted to see.

And we did it all without a press pass.

Sorry you had a bad time though, and I'm putting this comment up to give a balanced view of the event from my own personal (good) experience.