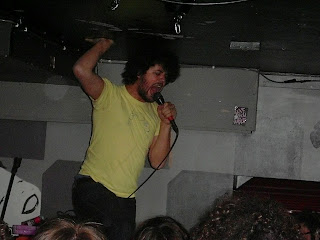 Passion Pit bring the live incarnation of their Chunk of Change EP and tunes from forthcoming debut album Manners to Brighton for the first date of a co headlining tour with Portland four piece Hockey. The weight of expectation for this gig hanged hype heavy as Passion Pit have received significant media coverage in the last few months. The buzz can almost be heard through your internet connection such is their profile on many blogs, including right here at Breaking More Waves.

Michael Angelakos and his crew seem completely nonchalant about any such expectation however. “Is it OK if we play a few songs ?” he enquires to woops of appreciation, as if he has just stumbled on stage by accident. And so they do.

Initially technical difficulties thwart the bands sound, but song by song things get better, the bands signature distorted falsetto vocals, mashed up beats, and warped hyperventilating synthesisers combining to get Audio slowly grooving. The band show an adeptness at cajoling and wrestling imaginative sounds from their keyboards, finding a neat niche between dance music and warped pop. Visually they look a little like the lost cousins of Hot Chip, all masculine indie boffin coolness with heads bobbing and shoulders frugging, bringing an engaging energy to the stage.

There is no doubt that Passion Pit are a band that will find as many haters as lovers as the year goes on. Depending on which side of the fence you sit their sound is either absurdly wonderful or acutely annoying and it is Angelakos’s vocal that will divide the most. Despite an initial false start which Michael describes as “the club mix”, Sleepyhead is the biggest anthem of the evening but there are other newer songs that demonstrate that the Chunk of Change EP will not be the last we have heard of Passion Pit.

After Passion Pit it’s left to Hockey to wrap things up. Although most punters here have come for Passion Pit, they stick around to catch 'the other band'. Hockey are a strange group. At their best they are what would result if LCD Soundsystem strapped on a few more guitars and jammed with The Rapture. At their worst they are a terrible house funk band with a second division headband wearing Mick Jagger type camp singer who occasionally likes to attempt to embarrass the room by rapping. Future single Too Fake is sleazy, streetwise and what The Strokes should have done after their debut album. “I'm just too fake for the world. Oh you know it's just a game to me, I‘m just too fake you see” proclaims lead singer Ben over funky beats and adrenalin rush guitars. It’s their best moment by some way, although the catchy chorus of Song Away comes close.

Both Passion Pit and Hockey have potential to go on to bigger and better things than a small basement club such as Audio. Let’s watch this space.
Posted by Breaking More Waves Blog at 00:11

wish pp could have played a decent venue, seemed to be the actual problem.

Audio is a nightclub rather than a purpose built live music venue, so therefore it has its limitations, I agree.

I recently came accross your blog and have been reading along. I thought I would leave my first comment. I dont know what to say except that I have enjoyed reading. Nice blog. I will keep visiting this blog very often.

We're pleased with how BMW blog is going so far. We have increased our monthly readership fivefold in the last few months.