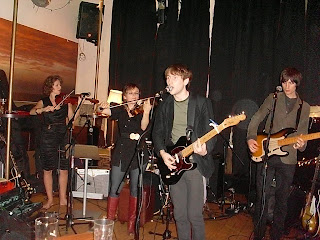 I first came across Orphans & Vandals at Summer Sundae Festival earlier this year, where their stark poetic beauty touched and engrossed me. Tonight at Portsmouth Drift Bar they do the same again. This is a band who with just a hint of the Velvet Underground use a minimalist mix of harmonium, violins, saw, guitars, xylophones, mouth organs and drums to create ghostly mesmerising music. Through their almost classical sound they produce a romantic stream of bed sit consciousness that flows from the spoken word of lead vocalist and philosopher Al Joshua. His poetry reminds me a little of Gerard Langley from early 90’s band The Blue Aeroplanes.

The bands music is sparse and often delicate, rising and falling in soft shudders. The band themselves occasionally border on arty pretension, with songs that are anything but your standard three minute pop song; and they are all the better for it. There are eight minutes of chiming guitars during Mysterious Skin with its sad imagery of Paris and lovers, it verges on perfect, only spoilt by a sound system that cannot give the clarity to Joshua’s narration. Without a word in between the songs to the audience except for a single “Thank you” at the end of their set, Joshua remains aloof and it suits the bands style perfectly.

Their music is way beyond the musical mainstream and this should be fully celebrated. The encore they get tonight is fully deserved.
Posted by Breaking More Waves Blog at 01:51

Email ThisBlogThis!Share to TwitterShare to FacebookShare to Pinterest
Labels: Orphans And Vandals