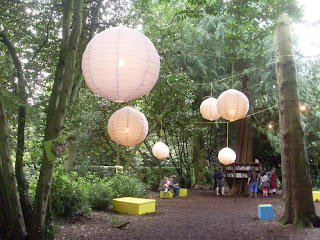 The Library In The Woods @ End Of The Road Festival

If the End of the Road Festival were a film it would be Juno. That is, it feels resolutely lo-fi, independent, slightly hip, folkish, American but European at the same, of high quality and good taste. And it even has Kimya Dawson. It is the last festival on the UK circuit and one can rightly use the cliché that in terms of festivals it was saving the best to last.
This is the third year of the events running, and the first time it has sold out, which must be a relief to Simon Taffe, the organiser who sold his house and moved his family into rented accommodation to finance the first festival.
The mandate for this festival is simple. It is all about the music. There are no over hyped bands. No flavours of the month. Just acts and artists that all have integrity and can really play. Add to this a range of quality food, decent drinks including luscious hot spicy cider and a great organic lager, staff and security who show respect, not one single corporate advertising hoarding, a really friendly chilled 5000 capacity crowd who all chat to each other, good infrastructure with plenty of toilets and water points, mysterious goings on in the woods with a library and a piano, and a beautiful garden type setting and End Of The Road Festival produces what is virtually my perfect festival. I say virtually because unfortunately on the Friday there was some rain, which did lead to part of the site becoming quite muddy, although it was nothing like the biblical mud floods of Bestival the previous week. Certainly the main open stage, known as the Garden stage remained fairly dry all weekend. 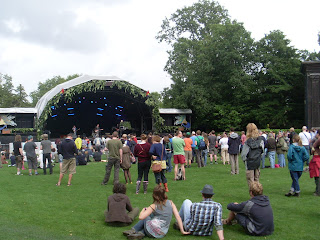 The music itself was also in many places astounding. On Friday things got started nicely with Laura Marling playing a strong set in the afternoon in the Big Top to a really appreciate crowd. Later as the night closed in Dirty Three let loose their free spirited feral noise, before ‘Mr Bright Eyes’ Conor Oberst took to the stage attempting to confuse people by announcing “Hello we’re The Decemberists”, and then letting his guitarist sing the first song. However once Oberst’s Larry the Lamb warbling was under way there was no denying that the man has a way with a tune, particularly on his simple gentle solo acoustic numbers. Oberst seemed to be enjoying himself announcing through the set “Hello we’re called Arcade Fire and we’ve come all the way from Canada to play for you tonight.” Then later “Hello we’re called The Killers and we’ve come all the way from Las Vegas to play for you tonight.”
Saturday and Sunday were even better. Bon Iver aka Justin Vernon was my highlight of the whole weekend. The album For Emma, Forever Ago is almost guaranteed to be in my Top 10 at the end of the year but I couldn’t see how an album as quiet and delicate as this could be reproduced on an outdoor festival stage in the middle of the afternoon. Surely it was an album to curl up at midnight to with a blanket by a camp fire ? Luckily I was wrong. I have never seen such a large crowd stand in absolute silence, totally absorbed in the music as during Bon Ivers set. Justin was obviously gob smacked by the reaction, every song greeted with applause that almost refused to stop. “This is one of the most beautiful days of my life,” he announces and there is no doubt that he truly means it. For the first time this year I have what the media like to describe as ‘A Festival Moment’. Here is a clip of Bon Iver, which doesn’t really do him justice, I think it was one of those you had to be there moments to appreciate the atmosphere.


But that wasn’t the end of the great performances.


Other highlights were Kimya Dawson who proved that she is witty, intelligent, funny and probably the coolest indie folk mum ever. Playing a low fi scratchy set which includes a number of children’s songs from her new album she manages to get the whole crowd to make daft animal noises as if we were kids in a nursery and it seems the most natural thing ever. Renaissance rocker Billy Childish, a man who sticks resolutely to his roots and has been name checked by Jack White, brought military uniforms and the coolest moustache to the Big Top with retro guitar joints that were surprisingly accessible. Essie Jain produced breathtakingly beautiful minimalist stripped down songs with a voice of that raised goose bumps on one of the smaller stages, The Local. There may be a plethora of female singer songwriters being pushed into the public domain right now, but if there is any justice, when her second album The Inbetween is released later this year this real talent will be allowed to grow.

I could write a novel on the musical greatness I saw, but enough to say the Noah and the Whale, Richard Hawley, The Wave Pictures, The Young Republic, Sons Of Noel and Adrian, British Sea Power, Absentee and Mercury Rev all delivered strong sets and there were many more.

Of course with any festival there are bound to be a few misses, but there were very few at End of the Road. Mountain Goats suffered from a poor mix and a set that lost many peoples attention, which is a shame as for many they were one of ‘the bands to see‘. Also Low’s set on Saturday evening was marred by their guitarist stupidly hurling his electric guitar violently into the middle of the crowd. It was fortunate that no one was hurt or even worse.

But these events aside, End Of The Road was simply the best festival I have been to this year.

It was so good that it has made me come home and think about music in a different way. My only problem now is next year do I return to End of the Road, or go back to Bestival which unfortunately next year have been scheduled for the same weekend ? Although this year Bestival wasn’t at its best due to the weather, it does retain a real musical diversity, which End Of The Road doesn’t, and a sense of playful childishness which appeals to my happy soul. End of the Road does however have a tranquil beauty and less full on atmosphere with a smaller crowd that makes it really easy to enjoy.
Posted by Breaking More Waves Blog at 21:46