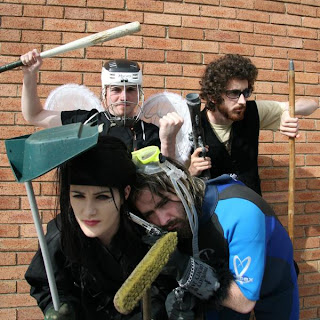 Every now and then a song smashes itself so hard into your ears with an energetic spit, crackle and fire that it just demands to be noticed. Lend Me Your Face, the new single by Dublin four piece Fight Like Apes is exactly that. Its fractured blend of aggressive Karen O style screaming vocal, hammering bass and synth almost achieves what the band set out to do when they formed in 2006; to scare audiences with poppy songs played so obnoxiously that everyone leaves. Except in this case the exit doors will remain shut. This song is like a violent shag on broken glass, where the cuts are all part of the pleasure.

This is a band that are not afraid to be confrontational. They have covered McCluskys Lightsabre Cocksucking Blues, a raw and dirty song about nicotine stained crotches, aching from f*cking too much and which asks “Are you coming?” in its chorus. And I guess they don’t mean coming down the shops. This is a guilty pleasure far removed from the concept of Van Halen's Jump or Chesney Hawke's One And Only. This is like a pumped up fist f*ck against the wall of a pub, under CCTV cameras with your mum and dad watching from the other side of the street.

Fight Like Apes first release was in Ireland with an EP in 2007 on independent label Fifa Records. Entitled How Am I Supposed To Kill You If You Have All The Guns it featured the song Jake Summers which has the fantastic lyric “You’re like Kentucky Fried Chicken but without the taste,” and was picked up by Fierce Panda offshoot Cool For Cats for a UK 7 inch single release. This was followed by the David Carradine Is A Bounty Hunter Whose Robotic Arm Hates Your Crotch EP at the end of 2007.

The band, who consist of raven haired MayKay on vocals, Pockets on keyboards, Tom on bass and Adrian on drums have subsequently played SXSW this year and are recording an album with producer John Goodmason (Sleater Kinney and Los Campesinos). They are busy touring the UK right now and are playing a number of Festivals. Lend Me Your Face is released on 7 inch in the UK next week and is available on I Tunes now.

Quirky, exciting, powerful and aggressive Fight Like Apes demand your attention. If you don’t give it, I reckon they’ll come and cut your face for you.