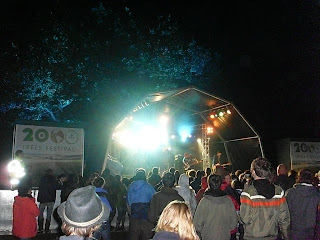 In 2007 the Two Thousand Trees Festival was set up as a reaction against some of the corporate monster festivals, which its organisers thought were poor value for money and more about profit than having a great time in a field. The result is a back to basics festival, with no thrills or spills other than the music itself. The festival features an eclectic line up over two small stages, one of which is outside, the other being an acoustic affair entitled the Leaf Lounge in a small marquee. Throw in a small selection of well priced and reasonable quality food stalls plus a couple of bars that sell amongst other things a 7% cider called Badgers Bottom at 3 pounds a pint, and hey presto you have a festival.

Unfortunately for organisers, bands and punters the festival was hit by heavy showers, which lead to the main stage area and paths through the campsite becoming a bit of a quagmire, although still nothing as horrendous as the mud of Glastonbury. Walking around the site was still pretty easy providing you had a decent pair of wellies, taking only 5 minutes to reach any point on the site, although some others decided on more unusual means of getting around......

As the weekend went on it was also apparent that a few more toilet facilities were needed as queues began to develop. The area around them also became very muddy meaning that it was impossible for the cleaning vehicles to access them to carry out essential emptying. To the festival organisers credit they quickly realised this, and rather than ignoring the problem, hired in additional toilet facilities which were then positioned in an area where vehicle access for emptying would not be an issue.

As for value for money, a 39 pounds ticket gave 2 days of entertainment and in total I managed to catch 25 full sets by the acts performing.

Highlights on Friday included ex Million Dead frontman Frank Turner who played once on each stage during the rainswept weekend. His opening lunchtime acoustic slot was a perfect rousing romantic kiss with just an acoustic guitar and a voice of passion.

James Yuill brought studio boffin knob twiddling laptop technology to a half seated audience in an acoustic tent. It shouldn’t work, but luckily Yuill had an acoustic guitar and some songs as well. New single No Pins Allowed sounds like Radiohead and Hot Chips kid brother (Kid J ?). In a pumped up dance tent it would be a major triumph, but the ambience of the leaf lounge was not quite ready for anything more than gentle head swaying.

Clad in a sparkling gold dress, Leila Moss of the Duke Spirit showed that it is possible to look sexy in a pair of wellington boots and rock with abandonment; even in the mud. Spotting locals from her old school in the audience she strikes poses to the battle hardened wall of sound that her band make and gains quite a few fans in the process.

Eighties Matchbox B Line Disaster headline and although their horror pops rockabilly bass lines and drunken Bad Seeds jiggery pokery may not always make the most accessible of sounds, their sheer contortionist showmanship certainly provides entertainment.

Saturday ups the stakes in terms of musical quality and there are many highlights. Natalie Ross from Guildford may look like the younger sister of Jenny Eclair but her cheeky eccentric acoustic fifties flavoured songs of secret lemonade drinking make one thirst for more.

Chris T-T is a seasoned festival pro and despite being late on stage quickly settles into a set the drags you in with its wit and humour before thumping you with politics. Now that Billy Bragg is driving round Dorset in his four by four (allegedly) we need Chris T-T more than ever.

Hereford may not be known for a rich musical heritage but with their mix of break beat, indie and hip hop, cutting in samples from the Prodigy, Daft Punk and Fatboy Slim the words 'festival crowd pleasers’ have to be reserved for The Anomalies. With their twin powered vocal delivery this gang know how to rev the engines. Asking a crowd to throw things at you so that you can freestyle about what is thrown is always likely to be a risky business, but when a huge blob of mud hits you in the face and you manage to continue to rap about it, respect has to be given.

But bizarrely the champions of 2000 Trees are Art Brut. One could accuse them of being a joke that has gone on for too long, but tonight they leave you with the biggest smile of the weekend. After an awkward start where the bands monitors have to be replaced lead singer Eddie Argos is left to entertain the crowd with some rather dubious juggling skills. Whilst this sounds like an excruciating finale it is tempered by Argos’s charm which is not dissimilar to Jarvis Cocker. Once the music finally cranks up it is surprisingly sharp, clever, witty, aggressive and powerful. With no set list the band even take the unusual step of getting the audience to call out requests, which they actually play.

Art Brut end 2000 Trees with a high that shows that sometimes you don’t have to have lots of sun and big name headliners to enjoy a festival.
Posted by Breaking More Waves Blog at 22:52

Hooray! You're back on the blog-waves...
And I got the first comment in too.

2000 Trees sounded fun if muddy. I'll keep my thoughts on Rautinen finnish folk festival for another time (although Jonna having her age challenged at the bar was funny - only 33 after all). Tomorrow is Pori jazz festival with Santana............... If I'm lucky we'll be struck by lightning or something. No sure it will be an experience...

MD - somewhere in the middle of nowhere in Finland.