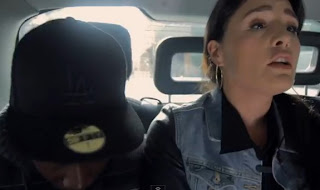 Even before Jessie Ware’s album has been released, Paddy Power bookmakers have installed Devotion as one of the front runners in their betting odds for the Mercury Music prize, behind Alt-J, Florence & The Machine and Richard Hawley. Jessie certainly seems to have found favour with many of the critics and buzz blogs. We’re a little surprised about the blog positivity – not because Jessie doesn’t deserve it but because her music is more akin to a comforting warm duvet than the sort of semi-edgy underground cool that you’d expect those blogs to get excited about.
Jessie has recently filmed a Black Cab Session and the film allows her to demonstrate her soulful vocal chords and together with her band her lack of regard to health and safety legislation. Just where are their seat belts?
Jessie Ware - Wildest Moments (Black Cab Session)
Posted by Breaking More Waves Blog at 08:30