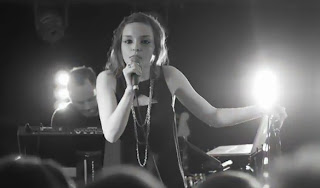 Back in May a new band banged its way out of Scotland with a predatory piece of electropop that was so glorious, so unmerciful that we almost lost control of everything. That group was Churches and the song was called Lies.

Sometimes we’re so convinced of a songs brilliance that we’re damn sure that everyone is going to love it as much as we do – particularly our online peer group within the new music blogging community. Sometimes it does happen, almost immediately, with a herd like mentality that sees everyone getting carried away in the giddy ga-ga rush. Other times it takes a little more time with a slowly rising trajectory gently gliding rather than rocketing to the stars. Then there are the times when we’re left scratching our heads wondering why nobody is picking up on some of the songs we love. A recent example of this would be the King by Sons & Lovers of which to date Breaking More Waves is the only Hype Machine listed blogger to have posted.

Thankfully Churches seem to be getting noticed. Blogs are picking up on them left right and centre, they’ve been mentioned by the NME, got the Guardian New Band Of The Day treatment in June and some decent radio coverage, all on the basis of just one song. The cynics are already moaning that Churches seem to have picked up astronomical coverage because of management connections they have within the music industry and this is unfair on other bands that maybe haven’t established such connections. We have some sympathy with this view, but two points need to be made absolutely clear. One, the music industry is called an industry because you have to work hard at things and that includes developing relationships with those who can support getting your music heard. Of course there’s some luck in it, but artists can improve their own chances through hard graft. Secondly it doesn’t matter how many people you know, how good your contacts are, if the music isn’t up to scratch you’re going nowhere. Nobody that commands respect in the music industry will put their backing to a fart of a tune.

Yesterday Churches uploaded this footage of their performance of Lies from their show at Glasgow Art School from earlier this month. Unfortunately you don’t get to hear the bands live sound here, the audio being the studio version. However the reports we’ve seen suggest that Churches completely nailed it (read this informative review and interview with Scottish blog The Pop Cop and this review from Everything Flows blog) and are the real deal. Certainly the band look great in this performance and lead singer Lauren (remember at the back of last year we predicted it was a good year to have a name beginning with L ?) wins the award for most bewitching eye make-up we’ve seen all year.

Take a peek yourself below.

Email ThisBlogThis!Share to TwitterShare to FacebookShare to Pinterest
Labels: Chvrches