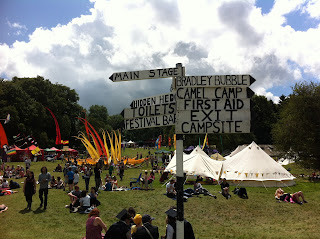 When Jarvis Cocker sang of 20,000 people standing in a field, he probably didn’t have Blissfields in mind, after all it didn’t exist until 6 years later than the song Sorted For E’s And Whizz; even although the festival does take place “somewhere in a field in Hampshire.”

However Cocker may well have found himself agreeing that the eleventh chapter of the festival was what “the future’s meant to feel,” being an event that punched above its weight with quality music, a beautifully decorated site and a mixed audience of old festival heads, families and a sizeable crowd of younger teen / twenty somethings. The music at the festival matched the audience demographic with everything from old fashioned favourites (Pronghorn, Dreadzone, Dub Pistols) to new young upstarts (Spector, Lucy Rose, Charli XCX). Apart from some drizzle early on Friday morning the site was mainly bathed in sunshine; it finally felt that the UK festival season had arrived after many other events of the previous few weeks had been mud baths.

So here is our review of Blissfields 2012 or rather as with all of our festival reviews this year, here are 10 things we learnt.

1.If you’re really hardcore you’ll have root canal surgery in the day and then play in a tennis kit wearing ska-rock band that night at a festival.

For that is exactly what the drummer of Imperial Leisure did during the festival’s limited capacity Thursday opening night, during a snappy brassy set that almost saw one of the giant lampshades hanging from the ridge of the tent pulled to the floor, bringing the roof with it.

There was a lot of crowd surfing, even during the slower songs.

3. If during the process of jumping off stage to go to the front audience crush barrier you wrap your microphone lead around the supporting pole of the tent, at some point you’re going to have to jump off stage again and unwrap it, making yourself look a bit silly.

Shouting that someone will have to move the pole just isn’t going to work. Take note Citizens!

4. Weddings could be the new income stream for festivals.

Rather than pay bands to play your main stage, why not host a wedding in the morning as Blissfields did and generate some money? Drawing a large crowd, there were genuine tears in the eyes as the bride arrived in a horse drawn carriage and Paul Bliss the head honcho of the festival conducted the ceremony.

As long as you remember your sun block. There were a number of examples of those who didn’t, including a man dressed as the American-Indian from the Village People and another sporting the classic ‘sunburn vest’ look. They seemed to be enjoying themselves, let’s just hope that their happiness didn’t turn to tears.

Minutes before Charli XCX’s set on the main stage it was possible to walk without difficulty right to the front barrier, as long as you avoided the group of lads playing catch with a ball. The lack of crowd was explained by the fact that Welsh singer / celebrity Charlotte Church had been assigned to the second stage; an odd scheduling choice. It was therefore packed to the gunnels for Church, useful for her management to report in any PR repositioning campaign. “Church pulls the biggest crowd of the day on her stage,” is a nice headline. It’s just a shame that so many missed the tartan and leopard print clad XCX whose full bloodied, bump and grind, attitude laden spice girl electropop was superb and one of the most energised sets of the weekend.

7. There was a small twat factor present at Blissfields.

Shouting “your band are shit, get a real job, you have no future,” at The Guillemots from the crowd as your friends edge away from you makes you look like a massive idiot. If you really don’t like them, why not go and watch something else. Likewise if you’re a shaggy haircut indie kid (who is quite possibly in a band themselves) and think that putting your finger up at Spector as they play is cool then we’re afraid it just makes you like a massive jealous knob-end. Finally if you think swearing at the top of your voice on the campsite at five in the morning when everyone is trying to sleep is clever, then hello, you’ve also just joined the school of twats.

8. Festivals are all about breaking down barriers between people.

Emily from Emily & The Woods defined intimacy for her set in the small Hidden Hedge stage, choosing to play off the stage in front of the barrier before performing fully unplugged in the middle of the audience.

9. However, the intimacy of small festivals can be destroyed by sound bleed.

Patrick Wolf played a special acoustic main stage set with violin, cello and piano. What could have been a moment of quiet beauty was unfortunately marred by pumping beats blasting out from adjacent food stall’s sound systems. It’s a shame this wasn’t considered in the site layout or that the stalls were asked to be quiet for the hour he played.

10. The Noisettes lead singer Shingai Shoniwa is one of the most entertaining front women we’ve witnessed for some time.

On stage acrobatics, climbing the stage rigging, pleated bow effect stagewear, a belter of a voice and irresistibly and relentlessly hooky songs that even the harshest cynic would find it hard not to enjoy, The Noisettes justified their status as main headliners for Blissfields 2012. They were the perfect ending to an almost perfectly formed small festival.

We’re streaming a remix of the new Noisettes single Winner below.