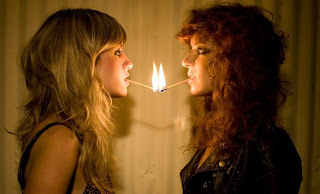 There are times in life when it’s imperative that music sounds lusty, dirty, hard shagging, hard rocking, bluesy, primal, why don’t we just f*ck now and to hell with the consequences. This is exactly what Deap Vally sound like. They’re the musical equivalent of lustily ripping each others clothes off in the middle of a bourbon-soaked party and doing it with everyone watching.
A couple of days ago The Times declared Deap Vally as "one of the buzziest bands in buzzdom.” Having featured the duo a few weeks back in our new waves feature we make no apologies for being part of that buzz, because this song, for which the band have now released the video below, makes us pull all sorts of strange excitably stupid gurning faces. Even Fearne Cotton has gone bad-ass and played it on daytime Radio 1. Well done Fearne. Well done indeed.
It may not be clever, but this beast of a track is heart-pumpingly good. Get some Deap Vally in your life.
Deap Vally - Gonna Make My Own Money (Video)
Posted by Breaking More Waves Blog at 08:30