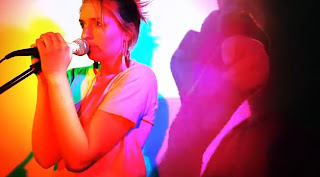 Having signed to Hype Music, a collaboration between Extreme Music Publishing and MTV Networks, indie electro pop wonderkids Arp Attack return with a new EP called Devil’s Drop. Recorded and produced in the bands own attic studio the EP finds the trio exploring the more quirky but still danceable regions of pop music. It’s not as instantly accessible as previous release Follow The Rhythm but give it two or three plays and its charms start to become apparent; it's all jerky and rhythmic and not quite sure what’s coming next, like a death row inmate raving in the electric disco chair, readying themselves for the full voltage. With lyrics about devils on her tongue, being the one you dream of and some sort of silent swimming we really haven’t a clue what lead singer Frankie is singing about, but with all these beats, pulses and hip thrusting grooves Arp Attack aren’t setting out to be the next Springsteen or Dylan. Just shake your booty and put your hands in the air and everything will be OK. OK?

You can purchase the Devil’s Drop limited edition CD from the Arp Attack Bandcamp page here.