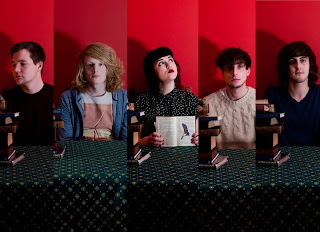 Today saw the announcement of this year’s Glastonbury Festival Emerging Talent Competition, which gives new UK acts from across the musical spectrum a chance to play at the world’s biggest and arguably most important festival. This year, to narrow down the 1,000's of bands who enter the competition Glastonbury are asking a number of UK music bloggers to help judge the entries. We’ll be talking more about this in a future blog.

Cast your eyes back to last year’s final shortlist of that competition and one name that crops up is a band that we have featured a significant number of times over the last year – leading to their inclusion on our Ones to Watch 2011 list – Newcastle’s Let’s Buy Happiness.

On the 28th February 2011 Let’s Buy Happiness release their new single, Fast Fast, through Ghost Arc Records. Light tribal percussion, Sarah Hall’s sweet fragile vocals and smoking then flaming guitars allow this wonderful song about someone who drives themselves crazy through overthinking everything to justify why we like them so much. Let’s Buy Happiness seem to be creating indie music that exists in its own bubble, outside of fashion, outside of influence except their own. It sounds unforced, natural and fresh, showing that UK guitar bands can produce something inventive and a little more challenging -Slough grit poppers Brother take note. We’re absolutely charmed by what Let's Buy Happiness are doing. Consider us musically kissed again. As lovely as summer.

I've become utterly enchanted by this band, all in the last 15 minutes! I blame you Robin! Seriously, they really an excellent band, thanks!

It'll be the band's first show of the year, with support coming from The Collectable Few, Escapists and Channel Cairo.

Check out http://laissezfaireclub.com/events for full details.