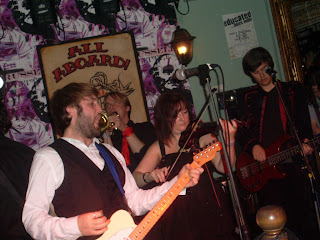 Email ThisBlogThis!Share to TwitterShare to FacebookShare to Pinterest
Labels: Chris T-T, Dj Hojo Hits, Holdfast, James Yuill, Loz Bridge and the Box Social, Revere, The B Of The Bang, The Dawn Chorus, The Deads, The Hall Of Mirrors

I am mighty pleased to say that not all stages suffered from drunken louts ignoring the music. The Loft actually saw a bit of a hippy love in when Django Django were on, with the front few rows sitting cross legged watching their Beta-Band-esque dance.

The levels of chat / totally ignoring artists at certain events (particularly festival type events) seems to have got considerably worse in the last few years - particularly in Portsmouth I'm sad to say.

I blame the way that the majority of the UK now consume music - as a backing track to their lives - downloads have ushered us back to an era of single tracks and one hit wonders, the public no longer having the attention span or ability to deal with anything longer than about five minutes that they don't recognise, particularly after a few drinks. At several festivals this year I've noticed audience members hanging around chatting whilst an artist performs waiting for "the song they know" then immediately leaving.

More hippy love such as that you described at Django Django is what is required I think.

Ban alcohol at gigs ? (no good as venues will not make any money). Test peoples commitment to live music before they come in to the venue ? Throw people out for talking ? Not sure there is an easy solution without spoiling the expectations of what the majority now believe a gig involves. IE; Meeting up with friends, getting drunk, chatting and being able to say "Oh I was there," without ever immersing themselves in the artists performance fully.

Talking of which, check back here on Wednesday for a review of an album that really does need your full attention....