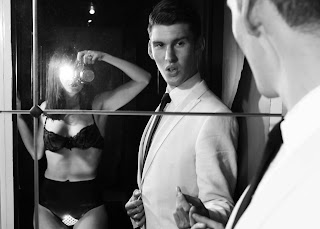 Our next One to Watch for 2012 certainly meets our criteria for producing something interesting. Albeit this judgement is made on the basis of only the two songs we have heard. The question of if it will be loved by the public is not nearly so clear, because what Willy Moon is doing is so different it's actually difficult to fathom if it's good or not. He could turn out to be 2012’s Marmite artist, dividing lovers and haters, or he could flop into the dark abyss of the bargain bin without anyone even noticing. Although we suspect that if he does end up in the trash can it's unlikely that it will be without at least getting noticed; for this is an ambitious young man. He's already been quoted as saying that he wants to be a massive pop star and that everything he does will be spectacular. Playing to fifteen people on a damp Tuesday night at The Bull & Gate isn't his style.

So what is it that makes Willy Moon so engrossing? The best answer is to watch the videos below. (Skip the remix and come back to that after you've seen the videos). Originally hailing from Wellington New Zealand but now based in London Willy Moon looks and sounds like he’s found some time warp from the 50’s and funnelled it to the present day. Anyone remember Westworld and Sonic Boom Boy? Well that’s a reference point perhaps.

With his snappy powder-coloured suits on his lanky body, hair full of Brylcreem, the most buttery feet you’ve ever seen move, Max Headroom styled stutters on She Loves Me, beats that could have almost come from a Jay-Z record, guitars that sound like they’ve been lifted from the grave of Bo Didley and songs that clock in under two minutes there’s no question that Willy Moon isn’t following any trend. The question is, will anyone actually like it?

Email ThisBlogThis!Share to TwitterShare to FacebookShare to Pinterest
Labels: Ones To Watch 2012, Willy Moon

I really loved his first single - good to see a second one, and thanks for posting the remix too. Let's see if he's more than a one-trick wonder. It's a good trick though :)

I belive She Loves Me may be the b-side to the first single !

This is odd. Kinda freaky even. I think its good, but not sure if I like it if that is any sense ?