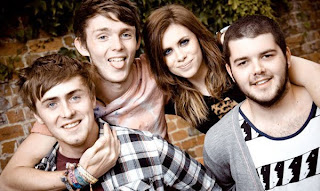 With The Jess Hall Band the name says what it does on the tin. They’re a band and their singer, songwriter, producer, multi-instrumentalist and leader is called Jess Hall. Simple.

Except it’s not that simple, because there’s more than just forming a group and writing a bunch of songs; you have to be good. Thankfully Jess Hall is just that. She has an uncanny knack of writing easy on the ear, radio friendly melodies and is blessed with a voice that it’s pretty much impossible not to like. Listen to Play Shy, the debut single released on Dec 5 through Hi-Tone Records and you’ll see what mean; enjoy the hand claps and acoustic guitars creating a clattering rhythmic backing to Jess’s sweet and deliciously light vocal. Hear The Jess Hall Band at the end of a long day and you’d have to be a hardened cynic not to feel a summery skip in your heart.

It probably explains why as yet The Jess Hall Band hasn’t been a name cropping up on the blogs. Most bloggers may be enthusiasts of music but they can also be cynics. To generalise, Hall’s style and sound doesn’t fit the typical blogger’s musical mind map. Give them some glitchy electronica, dirty fuzzy guitars or dark bassy rap and they’ll be all over it. Some Pitchfork, Gorilla vs Bear or Stereogum coverage helps to.

In her songs Hall manages to conjure a mix of deft acoustic song writing and sparkle that makes her stand out in a genre that is much over saturated at the moment with half-decent but hardly inspiring performers. What Hall and her childhood friends from Wiltshire do so well is to create hooky, memorable moments within the tunes – fundamentally these are pop songs played with acoustic instruments. Play Shy is the one that starts her off on what could easily be a very bright future. To see further demonstrations of her talent have a look at some of the bands cover version videos - playing Angus & Julia Stone (here) and Alicia Keys (in her kitchen of all places,below).

Email ThisBlogThis!Share to TwitterShare to FacebookShare to Pinterest
Labels: The Jess Hall Band