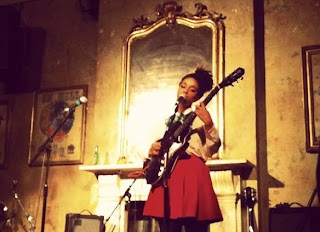 ‘Nothing like Corinne Bailey Rae or Andreya Triana, but we all have similar hair,’ states Lianne La Havas, our sixth one to watch for 2012, on her facebook page. If those two comparisons don’t sit comfortably with Lianne then maybe instead we should compare her to our first one to watch choice, Lucy Rose. There are at least several similarities. They’re both women for starters and both play acoustic guitar. They both also sing songs that have a tremendously soothing quality. Then there’s the matter that both have names beginning with the initial L. They certainly don’t share the same hair however.

It could be a good year for women who have names beginning with L. Four of our 15 selections are as such (our fourth selection, Foxes, is called Loui and we have one further to come very soon). Let’s see how that statement holds up next December.

However whereas Lucy Rose sings in a pretty almost dainty voice, Lianne’s vocal has a more of a soft sultry soulful quality. Comparisons to the likes of a lighter Lauryn Hill, Jill Scott or Eryaka Badu have already been thrown around by the bucket load as she sings her songs of heartbreak.

If you’ve already come across Lianne La Havas it may have been through the song No Room For Doubt, which she recorded with Willy Mason (video below), her cover version of Final Form by quirky indie rockers Everything Everything (below), her performance on Later with Jools, her Black Cab Session video, or maybe you’ve never heard of her before and are reading her name for the first time on this blog. Whatever way you’ve discovered her one thing that is absolutely clear is that this 22 year old south Londoner, who has sung backing vocals with Paloma Faith and has found everyone from the likes of Bon Iver to Fearne Cotton championing her, has the potential to release an album that could ooze quality.

Email ThisBlogThis!Share to TwitterShare to FacebookShare to Pinterest
Labels: Lianne La Havas, Ones To Watch 2012