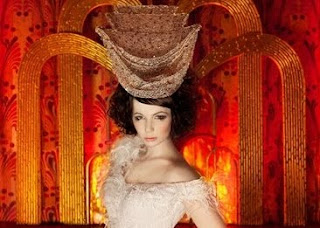 If you’ve spent any time on Breaking More Waves blog over the last year the chances are you’ll have seen the name Queen of Hearts crop up a fair few times. Queen of Hearts is a new electronic pop artist who makes music similar to Sally Shapiro, Goldfrapp, Little Boots and Ladyhawke, referencing 80’s synth pop and italo disco but with a contemporary sheen thanks to working with producers such as Dreamtrack, Sound of Arrows, Fear of Tigers and Monarchy.

After receiving significant blog love this year (Breaking More Waves probably more so than any other blog out there, first posting about her in February 2011 and numerous times since) she finally released her debut EP Arrival this autumn.

Queen of Hearts has said that she writes songs about the important things in life – love, loss, heartbreak, betrayal. She has been growing a small but devoted fan base through gigs that involve elegant theatrical costumes, dancers and her ‘creatures’ – a number of rams skulls that adorn the stage. This left of centre showmanship gives an approach that reminds us of a more restrained small scale post-Gaga, without the overt near-nudity. In fact Queen of Hearts manages to be a very sexy performer whilst keeping her clothes fully on. Look at the picture above for the evidence.

Whilst her appeal may be a little too niche to have any mainstream appeal at this moment (although like Hurts did over the last two years it may be that she just needs time to find her true audience), if you like electronic music and believe that pop music should be about elevating you away from normality to a world of fantasy then Queen of Hearts is one for you to watch in 2012.

Email ThisBlogThis!Share to TwitterShare to FacebookShare to Pinterest
Labels: Ones To Watch 2012, Queen of Hearts

Love her stuff. Can't wait to hear more from her this next year.