The Other Tribe - Skirts (Video) 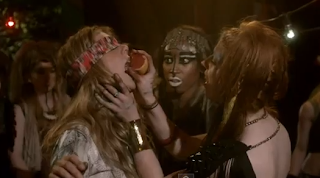 Last week we introduced the hedonistic sounds of The OtherTribe. Now here’s the video for the song Skirts.

The plot is pretty simple for this one. An innocent and pretty looking girl wanders barefoot through the forest (00.00-00.17), spots some graffiti by an XX fan (00.18), meanwhile some post-apocalyptic ravers have a mortar mixing party but forget to bring any sand to put in the cement mixer (0.23), Beyonce turns up in disguise (0.39) whilst a man with a reindeer / antelope fetish tries it on with the innocent girl (1.13), meanwhile the lead singer of The Other Tribe does some energetic dad-dancing (1.17) some faux lesbian touching starts, ending with the gentle coupling of the innocent girls breast and the messing up of her clothes* (1.50- 2.20) and her potential deflowering by the lead singer (2.20-2.30). Just when it’s all getting a bit too much we all realise that this is possibly just a trailer for the new Mad Max film and there’s even some traffic cones (there’s a good one at 2.46) on set to remind us that those films were as much about cars, roads and transport as they were Mel Gibson and Tina Turner. Alas Tina Turner doesn’t appear in the video, although if you look closely at (2.52) could that be her sister lurking in the background ? Meanwhile at (3.01) disguised Beyonce realises that innocent girl is actually Lana Del Rey in disguise and pops a blindfold on her in case she recognises any of the other famous / semi-famous people at the cement mixer party (3.15) which also include various members of the Klaxons as well as 80’s minor pop starlets Strawberry Switchblade and Sigue Sigue Sputnik. By (4.25) innocent girl / Lana has lost the plot after some fruit force-feeding and is dancing like a rave princess and frankly, she’s probably right to do so, because this is a bloody good rave / pop dance tune and bizarrely one of our favourite videos of the year.

*Footnote – we had wondered if the cement mixers would double up as washing machines to wash innocent girls clothes, but sadly the video director hasn’t got quite the same mindset that we have.

The Other Tribe - Skirts (Video)

Email ThisBlogThis!Share to TwitterShare to FacebookShare to Pinterest
Labels: The Other Tribe