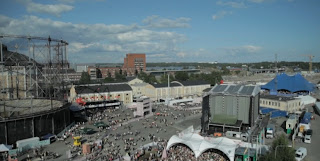 Whilst the UK is arguably the king of outdoor music festivals, with possibly the most diverse choice of events in terms of size, location, music, aesthetic vision and demographic, for those who want to take their musical adventures a little further afield the European festival market has also grown considerably. Alongside the more traditional and established rock festivals such as Benicassim in Spain and Roskilde in Denmark a whole breed of boutique style and urban festivals have grown up across Europe. Rather like the way they seem very good at doing pop music, it’s the Scandinavian’s who seem to be developing some of the more interesting events from the island setting of Hove Festival in Norway to Way Out West, which the Guardian described as Sweden’s answer to Bestival.

However, Breaking More Waves attention focuses today on Flow Festival, Helsinki, Finland. Placed in the unusual setting of the grounds of an abandoned power plant (Suvilahti) Flow has its own distinct identity through its unique urban location. Surely Flow is the only festival that features a huge brick chimney in the middle of its site? The location has a rough and industrial feel to it but the organisers pay great attention to soften this setting by careful attention to the aesthetics with considered location dressing - even importing turf in several areas.


Flow Festival has a reputation for being a little bit hipster and certainly with the likes of Bjork, Friends, Frank Ocean, Feist, St Vincent, Lykke Li, Nicolas Jaar, A$AP Rocky and Bon Iver on the bill it’s hard to argue with that. But mixed in amongst these bigger and very cool international acts are a whole host of Finnish bands and artists, three of which Breaking More Waves features as recommendations below - Burning Hearts, Stockers! and Pepe Deluxe.

Flow festival gets underway today with an opening concert from Bon Iver before the main event commences on Fri 10th to Sun 12th. Breaking More Waves will be carrying a full review of Flow Festival next week.

Burning Hearts - Into The Wilderness