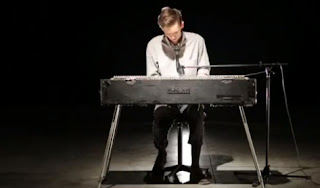 At risk of making a massive over generalisation there are two types of non-professional (ie not being paid a wage to create it and not being bound by a professional set of rules and regulations laid down by a governing body concerning ethics) new music blogs ( we’re discounting the listen once and then repost immediately buzz blogs from this generalisation as they’re a different breed again).

The first is the ‘fan blog’. This is essentially what Breaking More Waves is – writing about the stuff that makes us excited and then writing about it some more. Then writing about it again. Our hope is that by bombarding you with the artists we love you’ll eventually come round to our way of thinking. The second type is the ‘one recommendation’ type blog. Good examples of this in our country are A New Band A Day, The Recommender and also The Guardian’s New Band Of The Day column. These blogs tend to push forward something that has caught their ear, recommend them to you and then let you decide if you’re going to take up the mantle to follow the artist as they develop or not. They’re still fans, but are not going to blindly obsess over and over about certain bands on the blog. A good explanation of the ideology behind the ‘one recommendation blog’ was written in this blog post from Joe of A New Band A Day (together with a small comment from Breaking More Waves at the end).

Which brings us to Halls. We’re a big fan of Samuel Howard, yet you’d hardly tell from this blog. Rather like our post that included a letter of apology to Rachel Sermanni we seem to have failed in providing much coverage of his ambient and dramatic electronic work having originally featured him in February and March 2011. And so it is that we hang our head in shame. An utterly failed fan blog.

So let us make amends. Taken from his haunting debut album Ark comes this piece of ghostly celestial minimalism entitled White Chalk - for which a new video has just been released. Sparse, evocative and deeply moving, if an amalgamation of Perfume Genius, James Blake and Bon Iver sounds like your cup of tea, then come and sit at the table with us and we’ll make a brew. Maybe we’ll just post this track every day for the next week just to demonstrate our love.

Halls next live show is at Birthdays in London on Oct 30.

Email ThisBlogThis!Share to TwitterShare to FacebookShare to Pinterest
Labels: Halls

I think you're right, Robin - there needs to be a mix of fanzine-esque blogs that nurture new artists with repeated exposure, and the blogs that are scrabbling around looking for new bands.

Both approaches are essentially part of the same obsession: wanting to hear something good and new, and wanting others to share the thrill.

At least, that's what I tell myself in the mirror every morning, just as I'm about to give up for the umpteenth time :)