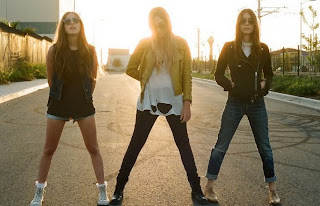 LA’s Haim have provided Breaking More Waves with not one, but two of the best gigs we’ve seen this year. The first was in the sweatbox of the Psychosocial Basement at Brighton’s Great Escape; one of those ‘buzz’ shows that actually justified the hype. The second was at Dingwalls in Camden London, where one of the three sisters described it as the best day of her life. They’ve also provided us with one of our favourite songs of 2012 in Forever, so whatever they come up with next has high expectations to meet.

To pass time though there’s a cover version of Fleetwood Mac’s Hold Me, originally featured on the Mac's 1982 album Mirage. The cover comes from a tribute album called Just Tell Me That You Want Me. We’ll take that, although what we really want is the bands own original material, which hopefully we'll see a lot more of in the next year or so. Also if they don't release anything else much this year (having signed a major label deal the day of the Camden gig) it wouldn't surprise us if their name cropped up on the BBC Sound of 2013 longlist. We'll put money on that now.

Email ThisBlogThis!Share to TwitterShare to FacebookShare to Pinterest
Labels: Haim