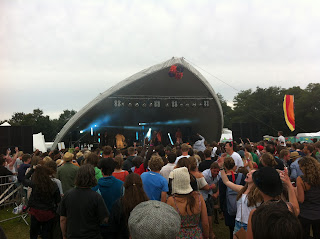 A review of Festibelly (or rather 10 things we learnt (or unlearned) about this small festival held in the New Forest, Hampshire just on the outskirts of the town of Lymington).

1. Festibelly may be on the same weekend as the ill-mannered coming of age post GCSE rampage that is Reading festival, but it is more akin in musical style to a smaller version of Bestival.

From the glitchy patchwork electronica of Gold Panda’s headlining Sunday night set to Skinny Lister’s rum sodden, knicker flashing, high energy, saucy sea shanty brand of old English folk on the same stage a few hours earlier Festibelly was wondrously eclectic; but all curated with a certain youthful coolness. And whilst not necessary being the most youthful these days, Mr Rob Da Bank, head honcho of Bestival himself, was on site to help DJ the silent disco, which according to the timetable ran on till an impressive 5am in the morning. (Although we’re unable to verify if the disco was still going at that time – we’d been safely tucked up in our sleeping bag for a number of hours before that).

There were some similarities to Reading festival though; Dan Smith, lead singer of Bastille, fresh from playing at Reading the day before, found himself crowd surfing during his bands blood and thunder synth pop set.

2. A festival isn’t a festival without a reggae soundsystem booming out at some point.

So even though we’re not huge fans of reggae generally (ok, not at all) well done to Festibelly for getting one up on the main stage on Saturday afternoon for the old-school festival heads.

3. A festival isn’t a festival without some naked people.

A few decades ago a music festival wouldn’t have been deemed a proper music festival unless it involved loved up hippies taking their clothes off and dancing to the music in the sun (or mud) au naturel. These days you’re probably more likely to get arrested if you attempted to do so.

So well done the two brave souls who for the sake of a ‘life drawing class’ outside the splendidly named Massive In China Tent bared all so that the ‘class’ could practice pencilling the fine specimens of human flesh with their left hands before participating in a ‘apply paint to the naked bodies themselves’ session. Equally hats off (or everything off perhaps) to the class who applied themselves to their tasks with just the required level of seriousness and good natured humour and the festival Free Hugs Girl who arrived halfway through with no knowledge of what was going on and showed no fear (and possibly even a little bit of joy) at giving two naked men free hugs. Imagine if real society was like that all the time. But that's part of the point of festivals isn't it? 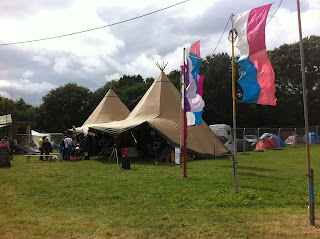 The Massive In China Stage

4. A festival isn’t a festival without someone annoying shouting ‘Alan’ in the middle of the night.

A few years ago anyone who wanted to show what a bell-end they were at a festival in the UK shouted ‘bollocks’ at the top of their voice in the middle of the night when everyone was trying to sleep. Now they shout ‘Alan’. Except at Festibelly. We didn’t hear either and for this ‘failure’ at being a ‘proper’ festival we are truly thankful. We suspect that at Reading Alan may have heard his name called out quite a few times.

That one’s a lie as well. We never paid more than £5 for any meal all weekend and for £10 got 2 lagers and one locally brewed cider.

6. A headliner who hasn’t even released an album probably isn’t a worthy headliner.

7. It is possible to run a music festival without corporate sponsorship and in your face branding.

This was Festibelly’s fifth year and the site is still free from any sort of corporate sloganeering, branding and advertising.

8. Position and timing on the bill is everything

A few weeks ago we watched quirky French trio We Were Evergreen play a thoroughly enjoyable mellow set at Camp Bestival early on a Sunday afternoon to a crowd who were basking in the sun lazily. Fast forward a few weeks, put them in a tent at Festibelly on a Saturday evening and watch a crowd dance loopily to their cute carefree toy town pop. It was rather marvellous stuff.

9. Don’t believe everything you read on music blogs - they don't always know the truth

Take a quick scan through some of the UK’s music blogs and you could be easily led into thinking that Bluebell is the next UK pop princess in waiting. Those blogs (including our own) are wrong. Bluebell’s live set was full of rock riffs and weighty beats - at one point Killing In The Name Of seemed to almost be emanating from the guitar on stage.

10. Believe everything you read on music blogs

The Blue Walrus described Mt. Wolf as a ‘soothing isolated beauty’. Faded Glamour talked of the ‘incredible ethereal vocals’. They were both right. Mt Wolf’s set in the Terrapin Tent (effectively a big top with some bunting, a crazy flashing light grid wall and some terrapin pictures) was staggeringly beautiful. Believe everything you read on music blogs and take a listen to a couple of their songs below.

Did you see Vaz in the terrapin on Sunday eve?? Those girls were amazing. Also i have photos of the life drawing models, mid pose, if needed.. :-) (and sketches, course)

Ha ha. No honest it’s fine. We have our own pics from the life drawing (which we’re keeping private for obvious reasons !) And yes we did catch Vaz (if you check their twitter you’ll see some photos that we tweeted from their set) – enjoyed their energetic tribal scandi-pop romp!