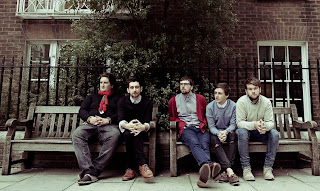 The Only Way Is Essex hasn’t done the county any favours in reinforcing clichés and stereotypes. Thankfully there are bands emanating from that part of east of London that conjure up a musical panorama a long way from Lakeside Shopping Centre or Stansted Airport; yet the airport is a reference point for this relatively new band for the music of Eliza & The Bear positively flies. Take a listen to Brother’s Boat which streams below. Jagged fist pumping guitars collide with gloriously uplifting trumpets and lyrics that hint at the euphoria of wide-open freedom and the confines of getting old. If music was a mathematics lesson a Venn diagram for Eliza & The Bear would probably contain circles with words like Arcade Fire, Dry The River and Strange Death of Liberal England in the bands circle, words like powerful, surging and triumphant in the emotions circle and quite simply the word superb in the quality circle.

Eliza and the Bear are a five piece consisting of James Kellegher, Christopher Ramsbottom, Paul Kevin-Jackson, Chris Brand, and Callie Noake. Their debut EP was recorded with producer Peter Miles who has worked with the previously mentioned Dry The River as well as The King Blues and Sweet Billy Pilgrim. The group are currently keeping much of their recorded material under close-wraps but they have put two songs out there, the aforementioned and rather brilliant Brother’s Boat plus a demo of another song Trees. Both will make you glad that you took the time today to press play and listen.

Email ThisBlogThis!Share to TwitterShare to FacebookShare to Pinterest
Labels: Eliza And The Bear