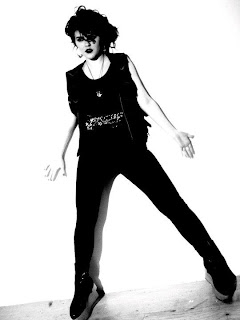 This time last year Spark aka Jess Morgan was still at school. Just a few months later she was on tour with Marina & The Diamonds. By November she had released two low key buzz singles - Shut out the Moon through Pure Groove plus Revolving through Neon Gold and had played a handful of gigs to screaming Diana Vickers fans. Next year will see the release of further ‘proper’ singles and an album. Things are beginning to explode for Spark. They may even go ‘boom,’ as her own catchphrase says.

Spark is no stranger to Breaking More Waves, and we’ve had a slightly turbulent relationship with her so far. Having suggested back in June (here) that as her career blossomed she would have to get used to the idea of media critics, we then did just that and reviewed one of her London shows, suggesting that the gig didn’t grab us by the balls fully (here). It was probably some of the first online criticism she had received.

Yet the reality is that very few artists are 100% fully formed when they start their careers. Sometimes it takes time. Unfortunately today’s fast turn-over pop culture often doesn’t give artists more than an album or so to develop.

But Spark has a chance. She’s her own person, strongly denying that she’s not a fully packaged production line pop artist that some have tried to pigeon hole her as – partly because she went to BRIT school. “BRIT is not what people think. It’s not a fame school. It’s not training. It’s just schooling,” she explained in an interview with Pop Culture Monster a while back.

Being aware of potential criticism for being plucked from BRIT and thrown straight into touring and promoting with a label and manager on board so quickly she wrote a now infamous blog last year explaining the way she believed things to be and the fact that she wasn’t manufactured. "If people think I've been manipulated or changed or altered or constructed or any of that, ahem, bullshit, then they mustn't have really known me in the first place,” she wrote passionately.

“I’m very, very fortunate to have a manager that is incredible and works her arse off. And everything goes through me and we work on everything together and we get everything done together and it’s a very equal and fair relationship and it works perfectly. I wouldn’t change it for anything, I’m so happy with her. But then I also have a label that has been completely supportive and took me on with all my songs – I’d written everything before I was signed,” the interview continued.

It’s those songs that she has written give the strongest suggestion that Spark is likely to be successful. There’s diversity to her tunes to show she’s not a one trick pop-pony and she possesses enough hooks and theatrics to appeal to a wide (possibly young female) audience.

Email ThisBlogThis!Share to TwitterShare to FacebookShare to Pinterest
Labels: Ones to Watch 2011, Spark