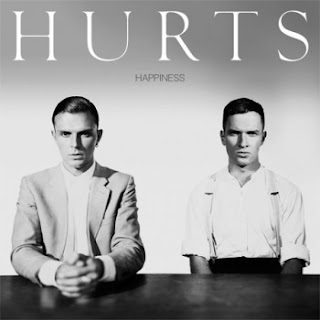 There are two sorts of end of year list. The first is decided by aggregation – the panel vote. It’s the consensus that keeps everyone reasonably happy, but no one fully satisfied. It irons out the quirks and idiosyncrasies that sometimes can make a list interesting or controversial.

The second type of list is a personal one. A personal list never suffers from smoothing of the peaks and troughs. All of the quirks, the foibles and the oddities hold their heads up proudly and shout “I really don’t care what anyone else thinks, this is my list, representing my taste, so it’s pointless disagreeing with my choices, because saying I’m wrong misses the point. Yes my taste isn’t the same as yours, but that doesn’t mean it’s incorrect.”

This is why we are proud to place Happiness by Hurts as our no.2 album of the year. It’s a very personal choice.

It’s a pop album. It’s full of simple human themes of love, sadness, loss and yearning. Yet despite ‘just’ being a pop album, we’ve found it one of the most emotional listens of the year. This emotion is not formed from any intellectual analysis, but simply from the heart. When Theo Hutchcraft sings “Swim with your sorrows, and try delusion for a while, it’s such a beautiful lie,” on Illuminated he captures the essence of inhibition through the use of another medium (drugs, music, sex?) so simply that it’s easy to identify with. And when on Unspoken he sings “And nothing you can say can save us this time, I’d rather be lonely,” the words are desperately double-edged sad. But in pop music emotional lyrics don’t carry without the tunes – and Hurts have plenty of them. Big soaring ballads, grandiose electronic arrangements, weighty echoing drums and colossal climaxes suit the mood perfectly, recalling 80’s acts such as Tears For Fears, Double, Black, Alphaville, OMD, A-Ha, and Ultravox – a seam of music not often touched, often seen as being ‘uncool’. But we all know that being cool is just transient and false. Better to follow your heart and stick to what you believe in.

Whilst commercially in the UK Hurts may have not fully delivered on initial promise, elsewhere in Europe they have. Breaking More Waves may be based in England, but right now we’re agreeing with music lovers in the likes of Germany, Sweden, Switzerland and Poland. According to one internet forum we read, in Poland they're the biggest UK band since Depeche Mode. Happiness by Hurts is one of our favourite albums of the year, and we really don’t care what anyone else thinks. In a world where 'alternative' often means recording some fuzzy guitar and wailing vocals and doing a blurred photo shoot, by doing something so uncool and opposite to what most music fans expect, Hurts are in an odd way a real alternative.

Email ThisBlogThis!Share to TwitterShare to FacebookShare to Pinterest
Labels: Best Albums of 2010, Hurts