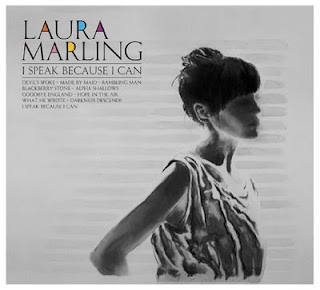 Laura Marling’s debut album featured in our top ten albums of 2008. Her second, I Speak Because I Can follows suit for 2010. This release shows an even greater maturity in Marling’s folk musicianship and lyricism than the first, Marling having stated that the album deals with “responsibility, particularly the responsibility of womanhood.” The production of the record matches her weighty development – not so much beefed up, but more deliberate, gently bolder and purposeful in its sound.

There’s just the right amount of variety in I Speak Because I Can to make every song stand out, yet also maintain cohesiveness. From the heavy Americana strum-downs of opening track Devil’s Spoke with its centrepiece lyric “ripping off each other’s clothes in the most peculiar way,” to the delicately strong Goodbye England (Covered In Snow) with its hushed strings and melodies – we’ll probably be playing this one at Christmas for years to come.

I Speak Because I Can succeeds because it is musically evocative. If it was a landscape it would be one of deep misty forests and tall craggy mountains, lit in deep sodium yellow. At times it feels virtually medieval, certainly stirring and haunting; there’s no doubt that a number of the stormier tracks bear the influence of Mumford & Sons, and Laura is currently stepping out with Marcus Mumford. However, unlike ‘The Sons’ the record is tempered with enough restraint to never have to resort to the full-on hoedown.

When I Speak Because I Can was released Laura announced that she intended to put a second record out in the same year. Whilst this didn’t materialise, when her third album does see the light of day we will be fascinated to see if she continues to develop at such a rate as she has between her first and second bodies of work. If she does it could be an absolute classic.