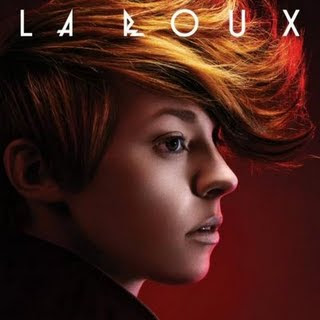 It’s incredibly easy to be dismissive of La Roux . With Elly Jackson’s shrill voice, her fixation with 80’s synth sounds, her petulant frown, her sometimes naive and aggressive comments in interviews ( but surely better to have pop stars with personality rather than those who have had their personality sucked out of them by media training ?) and that haircut ( we can only assume Jedward were taking notes) La Roux were in danger of being considered a novelty act.
Yet at the end of 2009 the debut La Roux album is our favourite pop record of the year, beating all other contenders (Lady Ga Ga, Lily Allen, Little Boots) by a mile. The reason ? For exactly the same reason as we chose Mumford and Sons Sigh No More at number 6 in our list yesterday. Great songs. The evidence ? In For The Kill - a number 2 hit. Bulletproof - a number 1 hit. Sometimes the public get it right. Furthermore this success was achieved without a high profile X Factor campaign or a TV advert to sell the tunes. In For The Kill slowly climbed the charts over a number of weeks as the public heard the song, loved it and purchased it. Such slow burners don’t happen very often in these days where radio plays the singles weeks before release or campaigns push songs to the top straight away.
Of course two songs don’t make an album. But this is where La Roux conquers - the album is packed full of songs that could easily have been hit singles. Fascination with its driving synth riff and ridiculously hooky chorus. Tigerlily with its quirky synth harpsicord sound and punching tightly cut beats. As If By Magic with its softer early Depeche / Yazoo pop sound. The album may have been very narrow in its musical vision - every track referencing the Vince Clarke / Blancmange revival template, but the great songs tunnelled it through. Where La Roux goes next will be interesting to see. We’re pretty sure there will have to be some musical departures to keep the public interested - a second album of the same will purge this 80’s sound of any remaining audience affection, but in 2009 La Roux by La Roux stands atop our pop throne.
\\\ LA ROUX /// IN FOR THE KILL

Hi... I always been a "muso" (a term for someone who takes music listening few light years past geekdom)... i love to go through the top lists of each year... you can have a sny comment about an album or go ballistic cos the journalist/blogger/whatever sees "the light" and you can rub it in your friends faces when they laughed at you for thinking Fuck Buttons are cool... (com'on "Fuck Buttons")

Anyway... I see the Le Roux album on few lists now... and i have, gone through it, rated each song and so on...

No the year wasn't that bad, and no you're not missing something. It's just you have different taste / criteria for what you like than others (such as Breaking More Waves) who love this album.

It would be a dull dull world if every blogger / critic / journo / human being (are human beings a different criteria from the previous three ? Hmmmm...) thought the same about everything - after all music is very subjective.

Keep checking this list, because our No.1 album of the year has hardly featured on any lists that we have seen, and the 1 list it has cropped up on it was in the low 30- 40's position ! It doesn't mean we are right or wrong about our forthcoming no.1 album, or you are right or wrong about not being that impressed by La Roux...again just different taste.

That is the beauty of music !

I always try very hard to see the other person opinion. I worked in music shops for a while and recommended albums that i really (and i mean really) hate. i tried to identify myself with the other person's taste in music. it worked most of the time...

but i cannot think of a person that would go mad for this album... i just think most people would not like it... not the "musos" and not the "masses" (as i said... these are my thoughts)

actually, in private, i think the album is OK..."Growing Pains" may be the hidden gem...

Your list of albums of the year is good. Except this one. Granted In For The Kill was a big tune, but only because of the Skream remix. But the album ? Bleurgh.

What really stands out about this album is the songwriting. If you haven't paid attention to that aspect, give it another careful listen.