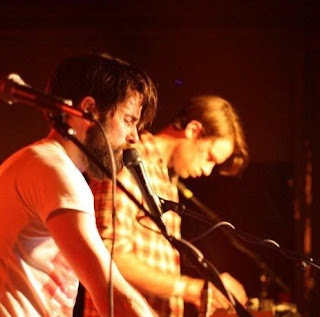 Our final addition to our ones to watch list is Clock Opera. Currently unsigned, Clock Opera are one of the most inventive bands doing the rounds. Formed from the song writing nuance of one Guy Connelly they have already created the most wondrous and joyous Once And For All, an electronically spliced, arms wide open, laptop symphony that is one of Breaking More Waves most played songs of the last sixth months. It just screams out to be released as a single.
But Clock Opera’s self titled ‘chop pop’, which Guy describes as “Record something quickly. Guitar or piano or whatever‘s lying around. Don‘t stress about quality. Chop into tiny pieces. Reconstruct. Hit whatever is near. Wail nonsense. Write words. Re-write words. Trim. Mix. Play,” has more to offer than just one song. Debut single White Noise and another song Man Made demonstrate that quite clearly, although we need to be careful with the bands use of the word ’pop’. For Clock Opera are probably not the sort of band that are going to be storming the singles charts, they are too experimental for that. They do have the potential however to create inspiring sublime tunes that could provide long term satisfaction rather than a quick fix sensation.
Clock Opera are still very much in their infancy in terms of live performance, having only played a handful of gigs, although Connelly himself has a history, having been in the band The Fallout Trust who then became The Corrections. Connelly has also composed music for the Rambert Dance Company using strings samplers and bits of metal and also the Tangled Feet Theatre Company. Clock Opera have also been working with Graham Stewart who has worked with Radiohead on mixes of some of their songs .
They are our final one to watch for 2010.
Later today, after celebrating this bunch for the last ten days, we add a chilly note of caution to the air before revealing our ten favourite albums of the year.
Posted by Breaking More Waves Blog at 00:01

Email ThisBlogThis!Share to TwitterShare to FacebookShare to Pinterest
Labels: Clock Opera, Ones To Watch 2010

You may be pleased to hear (I think we are starting to let people know finally!) that we are hoping to book Clock Opera to play at our Recommender gigs in Feb or March 2010 (in support of We Have Band!).

It's going to be part of our monthly social event, which fall on the first Wednesday of every month at Jam in the centre of Brighton.

Check our blog and the Brighton listings for more updates and get your Pompey ass over here...
Mike