The Antlers - Hospice - Album of the Year #3 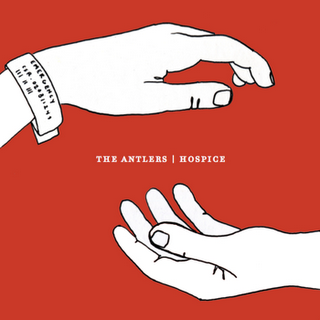 In our original review of The Antlers Hospice (read it here) in September we said that it was “an extraordinary album that demands to be physically owned and consumed with your ears from start to finish.” At year end we find ourselves fully agreeing with what we said back then. Hospice is a profound and sonically dynamic album that gets better and better with every listen.
Hospice is by no means an easy listen musically or lyrically. It has central themes of death, abuse, attempted suicide, ghosts and hospital machinery combined with a dense often all consuming musical structure that is as harrowing as the lyrics. The moment when lead singer Peter Silberman screams “Sylvia, get your head out of the oven,” as a barrage of white guitar noise crashes and storms the ears is as euphoric as it is depressingly sad. This is why Hospice works - it’s an album that in weaker hands would have sounded trite and schoolboy sixth form, but under Silberman’s guidance is mighty, intense and full of heavy dark weight.
It is never clear if the lyrical narrative of Hospice is fictional or based on real events, loosely the record deals with the relationship between a patient and another, heading into memories of abuse before death, but ultimately its extent of truth doesn’t matter. The test of any album is in the listening experience and Hospice succeeds as a squalling, shimmering, wrenching, exploding thing of dramatic beauty.
The video below is not an official video but a collection of photos meticulously pieced together by fan Dan Sully. The content of the photos is absolutely stunning and capture the music perfectly. Take five minutes out of your daily life to soak up this beautiful piece of art and music.
Posted by Breaking More Waves Blog at 00:01

Email ThisBlogThis!Share to TwitterShare to FacebookShare to Pinterest
Labels: Best Albums Of 2009, The Antlers

Brilliant album and sadly missing from many of the end of the year lists.

Glad to see someone on the case - Breaking More Waves and Anika in London are the only 2 blogs I read that are championing The Antlers.

Thanks Lesley. Hospice is cropping up on some end of year lists, and some other blogs in the UK, but sadly has been ignored by some of the bigger music publications.

The Antlers are coming back to play a larger show in London next spring so maybe their profile will rise a little more then.