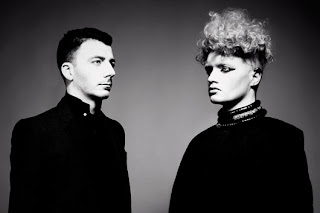 Remember Samuel and the Dragon? They created a beautiful hymn of minimalism called Diamonds On A Boat back in 2009. We got very excited about this wonderfully sculptured tune and started writing the words ‘next big thing,’ as music blogs do.

Blogs get criticised for ‘hype’ but this song was absolutely perfect and as any fan of music will know, when you hear something extraordinary you want to tell the world about it. So we did. Then nothing. Absolutely nothing. The Dragon departed and Samuel was left on his own as simply Samuel Chase. A few live shows followed and then more silence.

Until now. Samuel Chase has unveiled a new collaboration with Untold. They go by the name of Dreadnought and have a piece of music called Caroline. The track and the accompanying video is creepy, dark and sinister. As a commentator on You Tube states; Thom Yorke is a wet nappy in comparison. Prepare yourself – this is harsh.

Email ThisBlogThis!Share to TwitterShare to FacebookShare to Pinterest
Labels: Dreadnought

Just pooped myself the resultant was awesome.