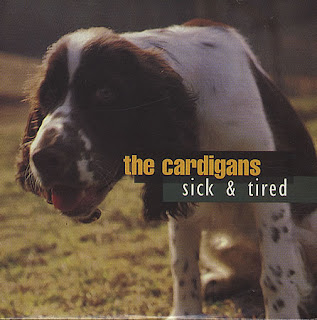 During the mid 90’s The Cardigans became my new favourite band. The first time I heard them was with Sick & Tired on GLR radio, which in many ways was a precursor to BBC 6 Music. At first I was sure it was a group from the 60’s; the sunny saccharine cuteness of the lead singer’s voice and the chirpy instrumentation surely couldn’t be from anywhere else. Yet it transpired that the Cardigans were a new group from Sweden and a few months later they were coming to England to play. The song seemed completely at odds with much of the emerging Britpop scene – this was music that gleamed with light rather than something that swaggered with laddish bombast.

As the band walked on stage at Camden Dingwalls they were everything I hoped they would be. Nina, the singer, stood at the front, sporting a shift dress, hand on hip, gently swaying her other arm and clicking her fingers whilst a good looking bunch of boys with bowl haircuts created hooky, catchy pop gems full of knowing ironic retro-references. They even covered a heavy rock song in a jazzy cocktail lounge style. They were brilliant and I was in love. .

The Cardigans was the first band that I ever saw more than a couple of gigs of on a particular tour, taking a week off work to follow them round the country when they formed part of the NME Brat Bus soiree. I got to meet the band and at their Nottingham show they even invited me in to watch their soundcheck, so impressed were they with my commitment to them. I remember sitting in the venue on my own, listening as Nina sang to just me and melting. .

Later years would see The Cardigans become international stars with their disco-influenced pop hit Lovefool, which featured on the soundtrack of the Baz Luhrmann film Romeo & Juliet and big hit singles such as Erase / Rewind and My Favourite Game, before they veered into darker less commercial territories that produced some of their finest work with later albums. It was this song that first grabbed my heart though and it still sounds fresh and effervescent today as it did then.

Email ThisBlogThis!Share to TwitterShare to FacebookShare to Pinterest
Labels: Music That Made Me, The Cardigans