Samuel and the Dragon - Diamonds On A Boat 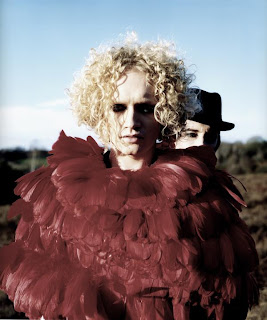 Photograph copyright of Maxwell Anderson.
Every now and then you hear a piece of music that comes to you with no reference points, no baggage, no history, just as a fully formed hymn that makes you stop everything you are doing. Diamonds On A Boat by Samuel and the Dragon is one such piece of music. Formed out of a brooding, haunting late night electronic landscape, a film reel rolling in the background and a plaintive soulful male vocal, it’s a minimally beautiful piece of work. There are hints of Goldfrapp, Portishead and Massive Attack in this highly moody modern sound.
We know virtually nothing of this act except that it consists of the mysterious Samuel, who certainly looks like he has the potential to be a flamboyantly brilliant star and a collaborator called James ( is he the dragon ?) The duo are currently playing a few limited gigs in London including Hoxton Bar and Kitchen on the 25th November and 93 Feet East on the 12th December. Diamonds On A Boat will be released on Moshi Moshi in November.

Diamonds On A Boat from Nicholas Audsley on Vimeo.

Email ThisBlogThis!Share to TwitterShare to FacebookShare to Pinterest
Labels: Samuel and the Dragon

Hi Anonymous - I've checked the HTML code for the video and that's fine, and I can see it on my laptop and a PC - so it must be something at your end ?

I love the song on Myspace but can't see it either!

Woooow, this is freakin fantastic!

Best you've posted in a while, Sir Robin.. Great stuff.

Thanks for all these comments, just a shame you all post anonymously. (And bizarrely all within a few minutes of each other!) Hope you are not all the same person !?!

It seems that on certain systems the video isn't coming up. I've just checked on another computer and it doesn't show on that one. So if it doesn't work hop on over to the bands myspace, turn off all the lights and listen to this haunting song there.

Thanks Charlie. You heard what the man said. Download the up to date flash player to see the video.

this is just excellent! both the video and the song. you can download it on mp4 format if you just signup on vimeo.
thank you very much for this post!!! it's been quite a long time since i was enthusiasted that much about a song or an artist!!!
can't wait for more material.

Yea, it's a great track and the vids good..But what's with the dude wearing make up? And is that a wig?

There isn't a download. We don't post downloads on this blog. So not sure what you mean when you say it doesn't work ? There isn't anything there to 'work'