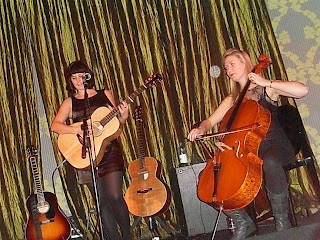 “This is a song about a boy I met once but nothing much came of it,” starts Kate Walsh as she glides gracefully into her opening song The Baker. This sums up Walsh perfectly. Her sweet sounding tales of personal relationships that didn’t work out are painfully open and honest. Frankly if we were dating her it wouldn’t surprise us if she took out her notebook every now and then to jot something down about how she felt, saving it up for a later song.
The Brighton based singer songwriter’s formula of easy on the ear acoustic guitar and confiding lyrics such as “I left you for another man, and he doesn’t deserve me” seem to have found a place in the heart of her audience though. The Hanbury Ballroom crowd listens in perfect silence; the only noise to be heard is the clink of glasses from the bar at the back. The sound is crystalline in its delicacy but also warm and full, with the sounds of cello, glockenspiel and piano adding depth. Variation is also added to the set with Kate playing a cover version of Erasure’s Little Respect, the lyrics seeming to have a deeper poignancy when stripped of its synth pop edges, even if a blast of sudden feedback halfway through sends Walsh into a fit of giggles. Later on Kate takes to the piano again to perform a classical interlude of a Debussy piece with her cellist. It shows what a fine musician she is and the ovation at the end seems to last forever.
However, the staple diet of Kate Walsh is soft acoustic guitar lullabies of the broken heart. Songs such as Tonight, about one night stands and tracks such as The Greatest Love and June Last Year from her new album Light and Dark are absorbing and beautiful, the kind of thing that given the right setting can almost move you to tears, particularly when her vocals are accompanied by guest vocals from Turin Brakes for two songs. If introspective girlish acoustic singer songwriters are your thing, then Kate Walsh comes highly recommended.
Posted by Breaking More Waves Blog at 00:01

Lovely! Saw her on the same tour at The Tabernacle in London. Absolutely adorable. I wrote about it here.