Exlovers - You Forget So Easily 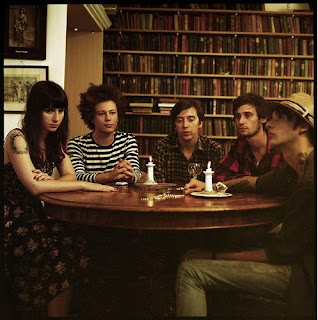 You Forget So Easily is the new release from Exlovers out now on 10” vinyl and download. The song is probably the finest thing they have released to date. Acoustic guitars create a dreamy strum through the end of summer, projecting a vague similarity to The Lemonheads or The Cure at their most poppy, whilst youthfully sad lyrics proclaim “I know the future doesn’t favour me.” Chin up Pete it will get better we’re sure. The easy criticism of the song would be that it is just a little bit limp sounding. Exlovers certainly aren’t going to appeal to chest beating ape men who want to fight in the street after six pints of lager. Instead You Forget So Easily will be loved by bookish and gentle indie boys and girls. It’s a song for creatures who appreciate a delicate song that rolls around with one line of melody repeated over and over, never finding a chorus or variation, but through subtlety manages to become parasitically lodged in the brain.
The video features stuffed animals, lots of foliage, lampshades and dresses hanging from coat hangers giving the band a slightly haughty air of ‘we’re a little odd, but not that odd’. We particularly like the way that Laurel gently bobs around, staring vacantly wide eyed into the camera in an offhanded slightly sultry verging on sexy way. She’ll probably give a few quiet indie geeks happy dreams. Pete meanwhile seems to give the appearance of someone with the same first name as himself - a folky version of Mr Doherty, which may do something for a certain breed of growing up Libertines fan, if that look still does something for you. It should all be about the music though not what the band look like shouldn't it ? Yeah right.

Email ThisBlogThis!Share to TwitterShare to FacebookShare to Pinterest
Labels: Exlovers