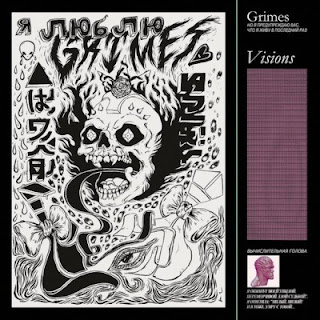 Visions is one of those albums that it’s very easy to approach with a hefty degree of cynicism. As the record was released the music media (and in particular music blogs) seemed to go into overdrive with enthusiasm. Yet this was genuine enthusiasm rather than some sort of sheep like, PR generated hype. For Visions is no featherweight buzz release that by the end of the year nobody actually remembers. Visions is one of the defining records of 2012.

It’s a record that manages to be pop and yet possess depth, originality and moments of weird-out groovy confusion. It’s a record you can dance to, listen to or f*ck to, but however you decide to enjoy it, enjoy it you will.

From Circumambient which takes wonky Orbital like computerisations and adds a clatter of rhythm, to the seductive six minute ethereal sexiness of Skin, to Genesis -  a tune so brilliant it takes Kraftwerk on at their own game of icy coolness and wins, this is a record that’s chock full of ideas. It’s a huge step on from Halfaxa her previous record, which brought Grimes to our attention back in April 2011 when we first featured her on the blog and establishes her as pretty much the perfect pop artist; making music that is edgy, a little oddball but still accessible. The indecipherable falsetto baby doll vocals, futuristic beats and playful captivating bleepy electronic sounds that make up Visions form that rare breed of a record; one that is unpredictable, constantly engaging and draws you further in with its looping exploratory layers. One of 2012’s complete listening experiences.

Email ThisBlogThis!Share to TwitterShare to FacebookShare to Pinterest
Labels: Albums of 2012, Grimes

Genesis is a fantastic song, and a few of the other songs aren't bad, but on the whole I wasn't too impressed with the album. When it comes to electronic music, a genre where the sounds, including vocals, are largely mechanized, I expect to find some warmth beyond the synthesis, and unfortunately Visions left me rather cold.

Maybe it's one of the reasons I like this record so much.

I noticed in reviews this year that there were a lot of critics who loved the record but quite a few people who went 'meh' and did't get it. That's taste for you !

I suspect the reaction will be similar to Breaking More Waves #1 album of the year - its arecordthat some critics and public absolutely hated !