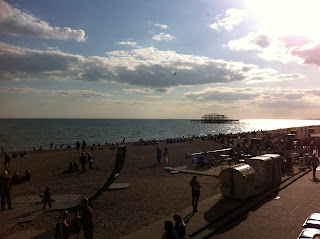 As the sun sets on the third and final day of Brighton’s Great Escape Festival we offer up 10 more thoughts on the 2012 event and some of the bands that played. More musings both here and here from the previous days.

Admiral Fallow is hardly a new band, just about to release their second album, but their Great Escape gig was everything you could ask for from a live music performance. Beautifully played, evocative and capable of bringing a tear to the eye.

Unfortunately Brighton has a number of these and unless you stood in the front two rows (we did) your chances of seeing anything more than the tops of popular bands heads was minimal.

3. The X-Factor to near credible pop person transformation is possible

Aiden Grimshaw (remember him the moody one out of the X-Factor?) continued his journey into the territory of TV talent show contestant to authentic pop star hipsters can get away with liking. This stage of the journey included playing at The Great Escape, on the same stage that will later feature indie flavours Theme Park and just down the road from the likes of Haim, Virals and Porcelain Raft. It was certainly an interesting addition to the bill, but then Grimshaw was never your typical X-Factor contestant. After all he appeared to be quite an intense introverted sort of chap (or at least that’s what he was made out to be). With a number of respected music sites giving Grimshaw’s debut single Is This Love positive reviews it has enabled him to be placed in a position where he can play what is essentially a ‘serious music lovers festival’ and be given the time of day and stand or fall on his own merits without so many preconceived ideas.

There are no screaming hyperactive girls in the crowd just a busy but polite audience eager to see what else Grimshaw will do. The answer is a series of (mainly) big electronic pop anthems, of which at least three (including Is This Love) sound like they deserve radio attention and chart success on their own merits rather than because of the X-Factor. Grimshaw still has the intense eyes and deranged expressions, there’s a bit of crotch fondling (his own) and an awkward ballad where he sings the lyric “Give me some rope which I can hang with,” so there’s still some torment in the material.

Those who cannot listen to music without talking about the concept of authenticity, an entirely different concept to the concept of if music is actually good or not ( aka the Lana Del Rey authenticity debate that raged last year) find it difficult to handle the idea that good music is something that moves you in some way and not by the constructs created by the environment and context that surround it. They will therefore never give Grimshaw the time of day. But we will at least watch and keep our ears open. For the record Grimshaw has one song that sounded like a potential big radio hit, some other near-heavy epic electronic pop songs that are pretty good and a few others that maybe aren’t quite as engaging – but as a ‘new’ artist this is better than many so called buzz bands who arrive on the scene with one idea, one song and quickly disappear into the void. So overall, an impressive second start.

4. Even new music festivals are to the majority of people still about big name headliners at a certain point in the evening

After watching Shields play their hipshaking danceable indie guitar grooves in Sticky Mike’s Frog Bar to about 100 people we ventured into the cavernous Coalition night club for Jinja Safari to find headliners We Are Scientists running late and packing the place to the gunnels. It’s something that most bands can only dream of.

This explains the sticky bit but we didn’t meet Mike. Or the frog. It used to be called Jam. Have a not too long think about that one.

6. Some people are happy to pay for a ticket to stand in a queue for half an hour get in a venue and then chat all the way through the band they’ve queued and paid to listen to and watch. Alcohol is largely to blame for this.

Next year we’re thinking of starting Europe’s leading chat festival. It involves bands queuing to come into your house whilst you are having a conversation with your friends, gagging you and then playing music very loudly at you whilst they drink only water.

7. Hair wars could erupt between Karima Francis and Emily And The Woods guitarist who happens to be her brother.

Both of whom have massive afro heads. Karima would probably beat Emily’s hair-bro. Emily also has pretty great hair, but it’s not as big. However we all know that bigger isn’t better right? And Emily has better things to do than become involved in hair battles. She’s got to get on with writing gorgeous songs, the type of songs that sound like a musical version of your nicest, sweetest, most emotionally endearing friend.

8. If you want to capture the zeitgeist be a one man laptop act or a lo-fi fuzzy indie guitar band.

Just don’t expect anyone to buy your records because there are already hundreds of other acts doing the same thing, but you’ll probably get a bunch of in crowd bloggers being excited about you until they drop you for the next cool underground thing.There was a lot of this stuff around this year. Mmoths (streaming below) and Oliver Tank (blissful ambient songs) stood out for us.

9. The Chevin nearly destroyed our eardrums

This band from Leeds had big void filling music that took elements of The Killers (2nd album), U2, Springsteen, Embrace and The Alarm and turned the levels up to maximum. Choose your own level of volume by listening to their debut single below.

10. The Great Escape is an excellent festival and a must for any new music fan.

Although we’ve never been to the Texas event a number of music industry-types told us that they actually prefer Great Escape to South by South West. Shh…just don’t tell anyone else as we don’t want everyone coming to it and making it impossible to get in to see anything.

We’ll certainly be back for Great Escape 2013.

I'll back you on point 6 - theres always room for one more 'niche' festival!

Also agree overall on 10 - TGE is in many ways better than SXSW, (but I'll still be going to SXSW cash permitting!)

I hate people who go to a gig to chat throughout the whole set with a passion. Surely they could simply go to a bar instead?