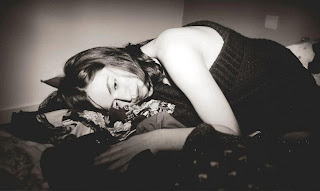 Today we’re introducing the music of Siobhan Wilson to the blog. It seems an appropriate time to do so as yesterday evening we went to to see Glasgow based Frightened Rabbit, a band whose stirring crossover album Pedestrian Verse is one of our favourites of the year so far. So why does this post on Siobhan feel so timely? The answer is that Wilson has worked with Gordon Skene from said band on her rather exquisitely crafted 6 track EP (it's actually 7 as there's a bonus track with the download) Glorified Demons. The EP (or is it a mini-album, we can’t keep up with the correct terminology these days?) was released last year and is still available from her Bandcamp – although if you want one of the CD’s jump in quick as at the time of writing there are only 6 left.

Siobhan’s music has a sense of fragile intimacy and simplicity that allows each song to paint its own subtle colour, from the jealous country blue of All Dressed Up “I’m all dressed up tonight but you couldn’t even care,” (Caitlin Rose fans will probably approve of this one) to the gritty yellow of Soldier of the Night “all the girls are dancing, all the girls are laughing.” There’s occasional hints of Laura Groves aka Blue Roses in some of the songs songs (Breaking More Waves favourite album of 2009) particularly on the track Car Crash Two, which features elegant piano arrangements to accompany the wistful vocal. It's a composition that seems to be more based in classical music than the pop / folk / country / roots genre’s it would be easiest to file Siobhan's songs under.

You’ll be able to catch Siobhan out on the road soon as in March where she supports Willy Mason on a variety of dates including in Breaking More Waves home town of Portsmouth.

Siobhan Wilson - All Dressed Up