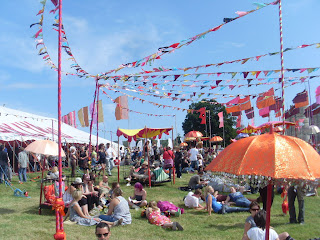 2008 was Rob Da Banks annus horribilis. The BBC Radio 1 DJ, head honcho of Sunday Best records and Bestival / Camp Bestival organiser had all manner of trials and tribulations with his festivals. The Bestival site suffered some of the worst rain and mud experienced at a festival and Camp Bestival left organisers pulling their hair out with some fairly major problems arising from lack of camping, parking and toilet facilities.
For Camp Bestival 2009 everyone was smiling again as 10,000 adults and 5,000 children turned the site at Lulworth Castle, Dorset into an exuberant and colourful riot of Hi De Hi fun. The problems from the previous year were fully resolved, with huge banks of toilets, and significant camping space provided for a festival of this size – albeit the camping areas still became fairly full with so many people bringing tents that resembled mansions onto site. The Kids Garden, set on the lawn behind the castle, had been expanded from the previous year and once again provided one of the most delightful areas of the festival. Here young and old alike could have fun with a huge number of activities from uni-cycle practice to donkey rides whilst also visiting a Bestival institution, the W.I tea tent, which served up sandwiches, cakes and cheap tea. There was also The River Cottage Café, a bar, a bandstand which played host to a number of up and coming bands in the evening, clear views of the sea and a huge number of activities, fun and games. The other main addition to the site from 2008 was the installation of a new Big Top second stage in the Magic Meadow area which expanded the repertoire of music, comedy, dance and film that was available through the weekend.
Due to its size Camp Bestival felt very much like the earlier Bestival events before it grew to the size it is today, but with a more laid back family friendly vibe rather than one of hedonistic partying, although for those who wanted to rave into the night the Bollywood Bar and the Black Dahlia provided DJ action from the likes of Skream and Benga, Boys Noize and The Sombrero Sound System. The site was beautifully decorated with an abundance of flags and bunting, with the holiday atmosphere helped even further by plenty of sunshine. By the time some rain fell on the third night it was too late to dampen spirits or the fireworks. As Rob Da Bank played tracks such as Orbital, Primal Scream and Cliff Richards Summer Holiday from the main stage, Lulworth Castle was lit up by a mesmerising display that made the perfect end to the festival. The start of this display can be seen in the video below.
Our only small criticism of the event was that a few more food stalls would have reduced some of the queues that developed at peak times, although a bit of advance planning meant that we never had to queue for more than five minutes. Also the only cider that was on offer was the rather disgusting Gaymers which was over three pounds seventy a bottle, which was in our opinon over priced. However security were very relaxed and there were no problems in bringing your own food and drink into any part of the site.
Although there was plenty of music of all types Breaking More Waves also took in a range of other entertainment including afternoon tea of cucumber sandwiches and cakes with a dose of vintage cabaret in the Edwardian themed Time For Tease tent, fun and games with the Bestival Bluecoats, watching the English National Ballet perform Angelina Ballerina, marvelling at the dazzling and amazing Insect Circus, the cool and tasty Mr Wippy and his dancing ladies performing from an Ice Cream van, dressing as a crocodile for a fancy dress parade lead by kids TV favourite Mr Tumble, spoken word and poetry in the Bookworm tent with Scroobius Pip, Chris Hicks, Rachel Pantechnicon, Kid Carpet and Polarbear, and many other activities in the kids area with the Breaking More Waves junior gang. Quite simply there was too much to do in just three days.
But despite all these eccentric attractions, we still fitted in some music, which is just as well, as this is a music blog. So over the next three posts let us guide you through some of the bands that made this years Camp Bestival so special. We’ll be putting up a post a day focussing on just the bands we saw.
Posted by Breaking More Waves Blog at 00:01

Nice description, but there were some big downers for us. First, programmes had sold out on Friday night, so those arriving on Saturday or Sunday had no clue what was on where, unless you were lucky enough to find a steward with a programme to hand - even the stewards didn't know what was on most of the time. Then there were some big mistakes in the line ups, not least putting a comedian in the Big Top (sorry, don't know his name, we didn't have a programme)with a lot of effin' and blindin' and really poor jokes about abusing kids, in front of an audience mainly made up of young children, eager to see the next performance, the English National Ballet showing of Angelina Ballerina. What went wrong Camp Bestival?

Hi Anonymous. Yes we have read on the Camp Bestival forum about these issues. Personally they didn't affect us, as we arrived early on Friday morning and obtained a programme no problem. Secondly we attended the English National Ballet performance but were aware that Lee Mack (the comedian) may be a bit 'poor taste' for young children and so we didn't take our children into the big top until after he had finished.

Rob Da Bank has acknowledged that putting the comedian on at this time was a mistake on the organisers part, and has apologised for this and likewise the programme issue needs more consideration for next year.

HI DE HI - We all had a fantastic time, especially the twelve kids that were with our crew. Mr Tumble on Sunday morning was definitely the highlight of my granddaughter's week, though quite surreal for us adults. The main arena was packed to the horizon with kids in fancy dress singing nursery rhymes, the biggest audience of the week-end!! We could have done with more toilets and hot showers around the crew camp-site with the amount of small children there this year. PO DE PO

Thankfully our kids are too old for Mr Tumble ! In fact when I suggested going to see him they looked at me in utter horror ! I'm sure you are right that it was probably one of the most surreal moments of the festival. We also spotted him performing on Saturday in the Bluecoats area (think this may have been unplanned) It looked like a rather scary experience, which we managed to detour from.

One of our funniest moments of my weekend was being asked (whilst dressed as a crocodile) by someone if I knew what time Mr Tumble was on. When I told him "Now, and he's just about finished," he looked like the ground would swallow him up. "Oh god, please don't tell my kids," he said. Bad parent. Bad bad parent !

Shame about the cider, but yay for the real ale tent, which is where I spent most of my time. Also some of the best music was in there - little acoustic gigs from local folk/jazz bands. Happy days. My write-up is here: http://rowstar.blogspot.com/2009/07/fun-in-sun-at-camp-bestival-2009.html