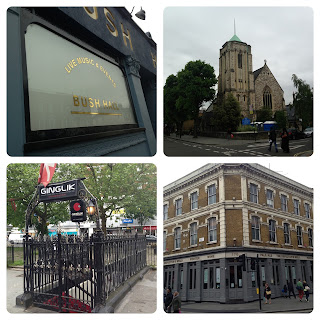 Bushstock is a one day multi-venue wristband access festival held in Shepherds Bush, West London. Hosted by Communion Records (partly owned by Ben Lovett of Mumford and Sons), who have been responsible for the promotion of nu-folk gigs since 2006, it's unsurprising to find that Bushstock leaned heavily towards acoustic acts, particularly in the quiet ambience of St Stephen’s church, the centre piece location of the event. 3 other venues also participated; The Defectors Weld (also an acoustic stage), the mirrored and chandeliered Bush Hall and the sweaty basement venue of Ginglik. Both Ginglik and Bush Hall hardened the line-up, featuring more indie-centric acts for those who found the rest of the bill a little too sedate.

The atmosphere of the event was relaxed and easy going and it seemed simple enough to flit between all four locations which were all within a gentle stroll of each other, without any worries of queues like some of the other big multi-venue events.

So without further ado, here is Breaking More Waves Bushstock 2013 review, or rather:

Beyonce, Elli Goulding and Florence and the Machine may have be playing just down the road in a huge rugby stadium but we bet you couldn’t just nip out of there and grab a cheap burger and chips from Chicken Cottage for £2.85 like we did in between bands. (Note: This review is not sponsored by Chicken Cottage)

We already knew this from our recent Great Escape 2013 shenanigans, but Bushstock just reinforced the view, although the use of the word rock n roll is probably a too muscular term; things were a little less animated at St Stephen’s. Even when Fyfe brought an electronic drum kit and some hip-hop beats to accompany his sparse guitar tunes it was relatively delicate and temperate. Highlights in the house of god (complete with beer advert posters) included the gobsmacking blues vocal of George Ezra (streaming below) who even though he’s only 19 years old managed to sound as if life has seasoned him with a bag full of soul and the complex quirk-pop of Sivu who together with his band that included cello, keyboards, drums and guitar created an idiosyncratic blend of indie from the same school of Alt-J, Wild Beasts and Gotye.

Or rather a subterranean Edwardian public convenience which was built to serve the spectators of the 1908 Olympic Games and then has been subsequently converted to a dark, sweaty, low ceiling venue is also the new rock n roll. Ginglik may have been immeasurably hot but its underground bunker ambience was the perfect setting for bands who traded in atmospherics and rhythms as much as they did tunes, both Post War Years and the crazy dancing electronic xylophone bashing Dutch Uncles benefiting from the cyclopean sound system and womb like surroundings of the place. Even better however was Duologue, who produced the kind of noise we’d like Radiohead to make if they weren’t too busy being avant-garde dads; modern hypnotic rock formed as much from electronics as guitars, but importantly still with melodies weaving everything together.

Of the acts on the bill, only approximately 20% of them are female fronted. Beyonce take note and action please.

5. Before giving recommendations of acts to see we should wait for the timetable to be published.

Only managing to see 3 of the 5 acts recommended in our preview was a failure on our part. Line up clashes are the bane of any festival.

6. Beards and folk music do not necessarily go hand in hand.

Bushstock was attended by as many (if not more) women than men, yet of the men we saw only a very small percentage were sporting beards. Naked chins seem back in fashion. We blame Ben Howard for this approach to all things acoustic. However, we were reliably informed by twitter communicators that Bushstock did become a bit more Beardstock as the evening progressed in the church where the likes of Scott Matthews and Willy Mason were playing. Maybe beards are just a sign of laziness? Can't be bothered to shave. Can't be bothered to get out of bed early to see the bottom of the bill bands.

It really is. Next time you are in the Uxbridge Road branch make sure you take a moment out to enjoy the dusty tired looking Christmas baubles hanging from the ceiling. Every day of the year.

8. Whenever you go to Bushstock you’re almost bound to hear someone mention the words ‘Mumford & Sons secret set’.

Even when the M&S boys are currently on tour in the USA.

9. Despite all the talk of beards, men and lack of female performers (maybe all the women were busy with Beyonce and the Chime for Change concert down the road?) the women that were performing were satisfyingly pleasant.

16 year old Rosie Carney provided a genteel start to the day with songs comparable in style to Lucy Rose, Laura Marling and Gabrielle Aplin. Whilst possibly still trying to fully find her own sound, Carney marked herself down as one to keep and eye and ear out for over the next few years.

10. Sitting for several hours in a church in the pews listening to music may be lovely on the ears but it hurts your bottom.

Next year we’ll take a cushion. Or eat more Chicken Cottage burgers and develop a flabbier arse for comfort.

Conclusion: With its small number of close together venues being busy, but seemingly never over stretched to capacity, Bushstock not only succeeds because of its musical quality but its intimacy and ease. Hopefully it will return for year four in 2014.