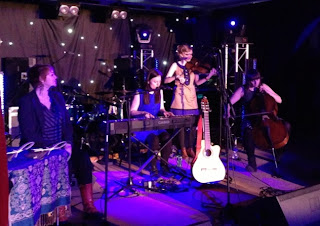 Last night sometime around 7pm Breaking More Waves tweeted from a Somerset working mens club the following words: “Just fallen in love with the sparse beauty of @BridieJackson1 at the @GlastoFest Emerging Talent Competition.” 4 hours later after 7 further performances from artists that ranged from a 15 year old dreadlocked rapper to a Brighton via France danceable twee indie trio, our adoration was confirmed by the judging panel of this year’s live final and the four-piece won a coveted spot on one of the main stages at the most famous music festival in the world.
Bridie Jackson and the Arbour were fully deserved winners. Despite being first to perform and much of the audience still making their way into the venue they became Newcastle's Uri Gellers of music, hypnotising with their  wonderfully stark songs formed from perfect vocal harmonies, cello, violin, piano and acoustic guitar. With no exaggeration, if we were to die tomorrow we’d be happy to pass away with the knowledge that we’d had the pleasure to witness Bridie’s voice live, a thing of subtle yet powerful loveliness. Did we melt a little? No, not just a little - completely.
We’re not sure what it is about the North East of England, but there’s something up there that makes us want to jump in a car and go and immerse ourselves in the music from the region. They just seem to get things right. From The Unthanks and The Cornshed Sisters - bands that Bridie Jackson and the Arbour share a certain closeness to in terms of their melancholy sound, sense of space and pitch perfect vocal harmonisations, to other Breaking More Waves Northumbrian favourites such as Let’s Buy Happiness and Lanterns On The Lake; whatever is going on up there has a habit of making us fall head over heels in love over and over again.
Listen to the band’s version of Scarecrow, written by their friend Louis Barrabas, below. It's a stunning tale from the grave that is haunting, gothic and quite simply one of the best songs we’ve heard this year, no question.
You can buy this and more material from Bridie Jackson here.
For some some great photos of the 2013 live final click here (see if you can spot Breaking More Waves in the audience shot)

Congratulations to the band, yesterday was Bridie's birthday so winning was a very special present from Worthy Farm.
Bridie Jackson and the Arbour - Scarecrow
Posted by Breaking More Waves Blog at 13:00

Email ThisBlogThis!Share to TwitterShare to FacebookShare to Pinterest
Labels: Bridie Jackson and the Arbour