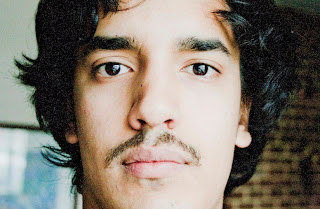 Let’s hope Luke Sital-Singh isn’t superstitious, because we’re naming him as number 13 in the Breaking More Waves Ones to Watch for 2013.

Naming influences such as Bob Dylan, Bruce Springsteen and Damien Rice it probably comes as no surprise to learn that Luke Sital-Singh is not playing hardcore techno, dubstep influenced pop or grime. No, he plays music that is stripped down, gentle and formed just out of his guitar (or piano) and vocals. Sometimes such as on the track Fail For You his voice is multi-tracked and layered to staggeringly beautiful effect but otherwise everything is kept pure and simple. Notice we didn’t use the word folk music when describing Singh’s genre, but certainly this is closest to what he’s doing. But let’s throw away genres, as useful as they sometimes are, and talk about how the music makes us feel. It’s at that point we can use words like warm, enchanted and laden with love. It’s music to cuddle up and put your head on your partners shoulder, which, especially if you’re a cool as f*ck hipster indie kid who doesn’t know love except for love of yourself, (some would call that masturbation) will probably sound like the type of sentimental cliché that will make you want to punch both our and Sital-Singh’s lights out; but we make no apologies.

Luke Sital-Singh plays a few headline dates in December in Brighton, Manchester and London following a support slot touring with one of our Ones To Watch from last year The Staves. Maybe they’ll pass the baton of loveliness and together we can bludgeon the cynics and unfeeling with it.

Sital-Singh is a talented and gifted songsmith and for that reason he deserves to feature in this Ones To Watch For 2013 list, even if it is as in this case at unlucky 13.

Luke Sital-Singh - Fail For You (Video)

Email ThisBlogThis!Share to TwitterShare to FacebookShare to Pinterest
Labels: Luke Sital-Singh, Ones to Watch 2013