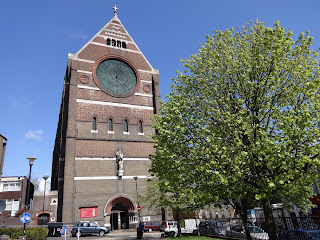 With the stars of tomorrow, the wannabe stars of tomorrow and the ones just doing it for the love of music irrespective of stardom or what happens tomorrow strumming, bashing, plucking and pressing their musical wares in every pub, club and gig venue down by the sea in Brighton over the course of three days it can only mean one thing. Yes, it’s the Great Escape Music festival; Brighton’s answer to SXSW and the UK’s largest and most established multi-venue new music festival.

Now in its eighth year Great Escape has grown rapidly. Whereas once there was a handful of poorly attended daytime gigs and a bunch of official night time shows, now there’s a rammed programme of events from lunch time through to the early hours of the morning, plus for music industry types a full blown conference as well.

Whereas the biggest worry for punters at most UK festivals is what will the weather be like, will the tent get washed away and how deep will the mud be, the question on most minds at Great Escape is how long will venue queues be and will they end up spending their time stood outside on the street listening to the dull thud of a drum being hit inside to the couple of hundred people who planned better than they did and arrived super early to queue for the latest buzz / tastemaker endorsed band?

Breaking More Waves has been in the thick of it of course, turning up at gigs super early to avoid the queues and catching as much new music as we possibly could. From the latest hype band to the virtually unknown, we cast our net wide. The results are our Great Escape 2013 review, brought to you in bit sized chunks each day, starting with yesterday (Thursday) or as we like to call it:

1. Brighton wouldn’t be Brighton without a trip along the pier. But the Great Escape can do without it.

The romantic vision of ice creams, tacky amusement machines, the funfair and saucy seaside postcard images might be a holiday makers gaudy dream but the reality was that Horatio’s, a karaoke bar on the pier, which in previous years had been used as one of the locations for Great Escape, made a terrible venue. The unique concept that the bar was on a pier didn’t compensate for a low stage, poor sound and lack of atmosphere. Thankfully in 2013 organisers seemed to have realised this and Horatio’s was no longer part of The Great Escape. Good riddance to it.

We’re not talking about Chvrches the band (although like a Mr Kipling cake they are part of the exceedingly good set of synth pop bands out there) but the buildings. Rock ‘n’ roll is officially invading the house of god with the Great Escape using four such buildings for gigs.

3. Churches might be the new rock ‘n’ roll, but their ambience still ensures good behaviour.

The high vaulted grandeur of St Barthomew’s church (pictured above) may have had a bar selling alcohol but the audience for each of the bands playing there (Ruen Brothers, Milo Greene, London Grammar and Tom Odell) still sat in silent and polite admiration. And there was a lot to be admired.

The Ruen Brothers might sound like they’ve stepped straight out of the 50’s but their retro rock ‘n’ roll brimmed with a jubilant energy. The instrument swapping, every-member-of-the-band’s-a-vocalist LA quintet Milo Greene’s (streaming below) folk-pop added sun-smothered harmonies and was so perfect you couldn’t help but wonder if the whole thing was actually on tape. America’s got talent. Buzz band of the moment London Grammar showed exactly why so many people have been falling over themselves to sing the bands praises. Hannah Reid’s soulful vocals were nothing short of sensational, the band’s music so rich and full of calm beauty, they fully lived up to the hype. The only question is that their set mainly contained songs that they have already released. Will they be able to maintain the quality for a full length long player? Tom Odell, the new king of floppy fringed soft MOR completed the evening, providing moments of tender intimacy at his piano during the likes of Sense as well as stauncher rockier numbers accompanied by his band including a cover of The Beatles’ Oh! Darling. Odell may not have the emotional weight or multi-dimensional greatness of some of the singer songwriters he appears to emulate, but his set was greeted with (polite) enthusiasm from the St Bartholomew’s audience.

4.If churches are the new rock and roll then sometimes the old rock ‘n’ roll needs to take lessons.

Down at seafront nightclub Coalition we saw a rather different sort of audience, particularly for Chicago / Minneapolis synth / guitar three piece On an On, who formed from the ashes of Scattered Trees. Here’s a question. If you’re going to a gig and going to position yourself in the front rows of the audience why stand with your back to the band for 80% of the set chatting to your friends? Ah, we see, you’re drunk and you're acting like an idiot.

5. Somebody in Brighton must smell.

A well-known men’s shower gel / deodorant company that rhymes with stinks seemed to be everywhere giving out free samples at Great Escape. Thankfully though the event has yet to turn into the horrendous gluttony-fest that by all accounts SXSW is where ‘getting free stuff’ has almost become as important as the music.

6. Even at urban festivals the weather and time of day affect things.

Witness the razorblade vocals and intense guitar sonics of Holy Esque. Unquestionably an impressive alternative rock band, their set seemed mismatched at 3.30pm in a dark studio theatre room when the sun was shining outside. Maybe a late night audience buoyed with a little alcohol would have helped a little more on this occasion? Meanwhile half an hour later, under warm sunny skies at a point in time when much of the festival programme was taking a half-time nap the outdoor Hub Stage was packed for We Were Evergreen who brought innocent French abandon to the masses. Suddenly summer seemed just around the corner.

7. The Other Tribe are fun to dance to.

8. We love Scottish girls. A lot. Maybe too much.

With cowboy tassels, big eyelashes and sultry sad pop noire tunes Laura St Jude’s remarkably calm and poised songs hit from the first note. Add to that two lasses by the name of Honeyblood who look super cute and hippyish but throw out brash music that's raucous and rocked with fuzzy glee and it’s fair to say that we’re ready to declare proposals of musical marriage to Scotland.

They may have started as an anonymous Mancunian online enigma, but No Ceremony /// is actually formed of real people, not robots; normal nice looking people. In fact the sort of people that we'd happily take home and introduce to the parents. There are no masks or screens to hide their identity and the three piece make no attempt to shroud the lead female vocals with effects and auto-tune as on record (although the male ones are). Live they take the thud of the clubs and transport it to some brooding otherworldly place with an underlying sense of paranoia. Equal parts melancholic and euphoric No Ceremony /// proved they don’t need to hide themselves away.

10. Urban festivals are so much easier than camping festivals.

Short walks between stages, no drunk idiots chatting outside your tent at night, a refreshing warm shower (with no queue) first thing in the morning, coffee shops on every corner, really it makes us question why we all bother hiking off to a field in the middle of nowhere every summer.